Ford Madox Brown (1821-1893) was an English painter and designer. Born in Calais, he spent the majority of his childhood moving between France, Britain and Belgium. This meant that his education was patchy, but it enabled him to develop his rare talent for drawing at some of the best art academies in Europe.

After meeting Dante Gabriel Rossetti in 1848 and teaching him for a short time, Brown became closely associated with the Pre-Raphaelite Brotherhood. Brown shared the Pre-Raphaelites' conviction that art should be true to nature rather than self-consciously stylised or “mannerist”, and that it should serve as moral guidance.

“The Death of Tristram” is a stained glass panel that the artist and writer William Morris asked Brown to design in 1862. It is part of a series of thirteen panels that the merchant Walter Dunlop commissioned from the furniture and decorative arts firm Morris, Marshall, Faulkner & Co. for his house, Harden Grange, near Bingley. 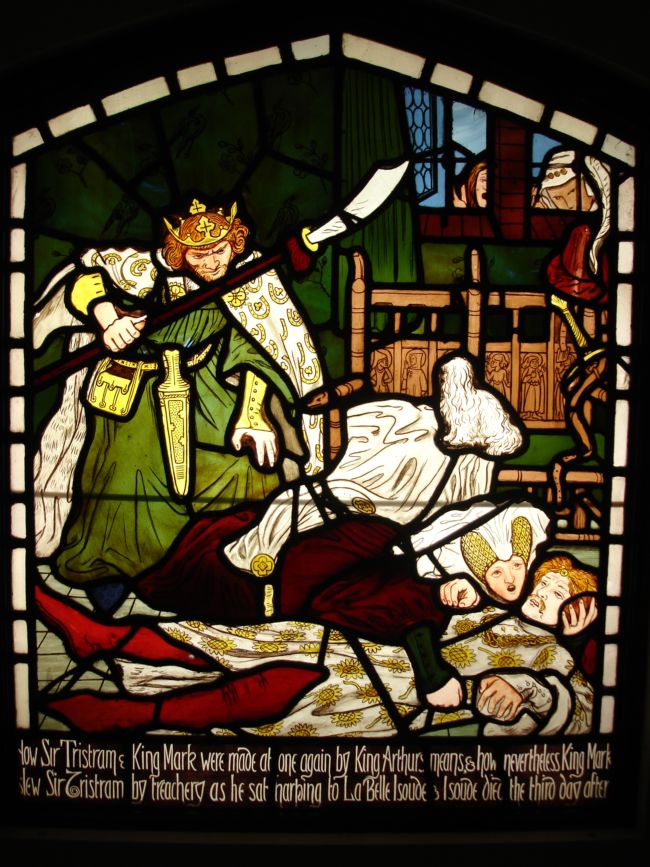 The panels depict the medieval legend of Tristram and Isoude (or Tristan and Iseult). There have been many different versions of this legend, but the basic story is that Tristram is sent on behalf of his uncle, King Mark of Cornwall, to seek the Irish princess Isoude's hand in marriage.

However, the young knight and the princess fall deeply in love (in some versions of the tale, this happens because they mistakenly drink a love potion).

Although Isoude has to marry King Mark, she and Tristram continue to see each other secretly.

The king, who has raised his orphaned nephew and bears him great affection, tries at first to ignore this betrayal. However, Ford Madox Brown's panel shows the moment when King Mark finally succumbs to his jealousy and kills his nephew.

This stained glass window is part of Bradford Museums, Galleries and Heritage's collections.