This is a Krater vase from 450 BCE, made in the shape of a bell. Kraters were used to mix wine and water. As they were quite large and heavy when full, they were placed in the centre of a room during a “symposium” (a drinking party) and people would use smaller vessels to transfer the drink to their cups. 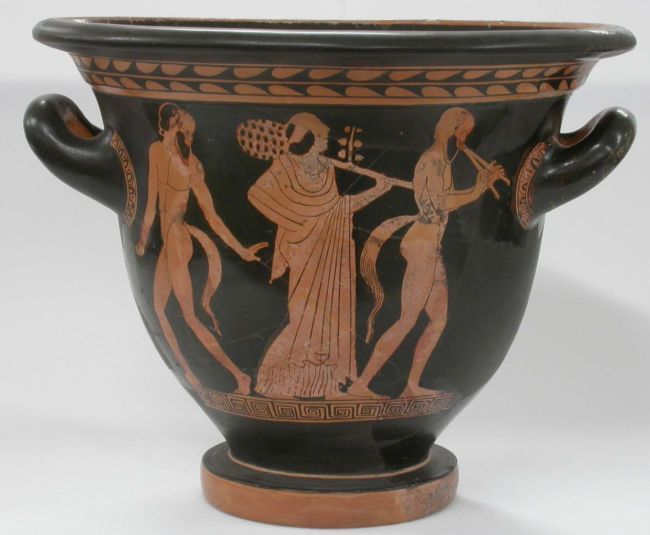 Bell Kraters were always red-figure ware. The background was filled in with black paint whilst the clay was still damp, and only the details of the figures were painted. When the pot was fired, the unpainted parts of the figures took on a distinctive reddish colour because Athenian clay was rich in iron. This technique replaced an earlier technique in which figures were painted as black silhouettes on a red background. It allowed artists to be more detailed and realistic in their depictions.

On this vase, the scene shows followers of Dionysus.

Dionysus was the son of Zeus (the king of the gods) and the god of wine.

He represented the intoxicating power of wine, but also its more social and beneficial aspects. The Ancient Greeks believed that wine promoted civilization and peace by liberating people from their worries and their normal selves.

This vase is part of Museums Sheffield's collections.