Sholay, a Bollywood poster from 1975

Bollywood is the informal name given to the Mumbai-based film industry of India – the biggest film industry in the world. The word is a combination of 'Bombay' (the former name for Mumbai) and 'Hollywood'. Bollywood films are very distinctive and extremely lively. 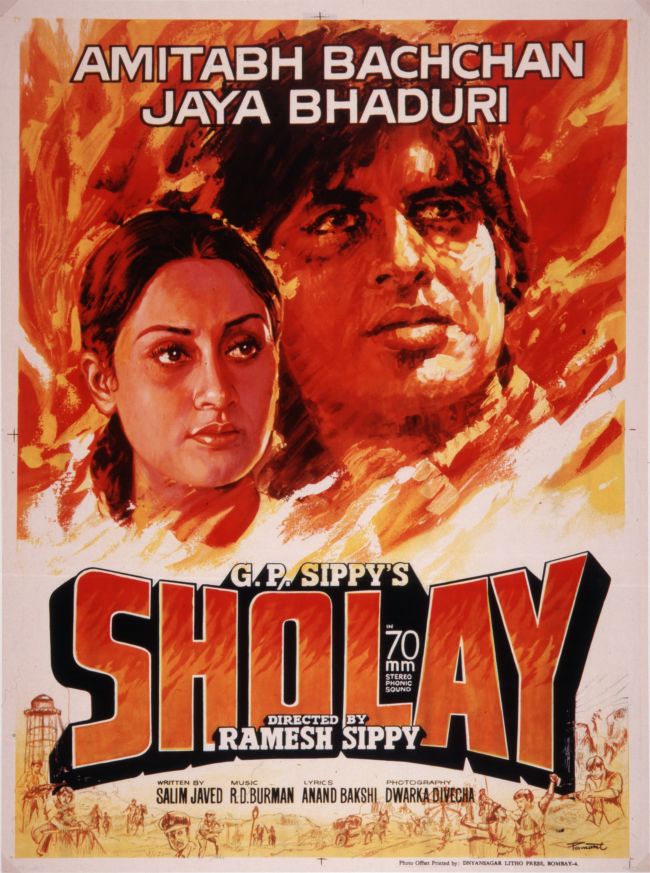 Although it was declared a commercial disaster when first released, the film became the highest-grossing film of all time in India. It earned 2,134,500,000 Rupees, equivalent to 50 million US Dollars.

In Sholay, a retired police officer called Thakur gets two convicts to capture Gabbar Singh, a bandit chief who has been terrorising the small village of Ramgarh. Thakur also wants the bandits to get revenge for him, because Singh killed his entire family (except his daughter-in-law) and cut his hands off.

The two convicts grow fond of the villagers and they fall in love, one of them with Thakur’s widowed daughter-in-law. The original ending sees Thakur killing Gabbar Singh. However, the Indian censors decided that a police officer could not be shown to be a murderer. A new ending was filmed, in which the bandit is arrested. This plot can be compared to that of Akira Kurosawa’s 'Seven Samurai' and the Hollywood remake 'The Magnificent Seven' directed by John Sturges.

Play the My Culture Quest game and collect this Bollywood poster for your exhibition.

This poster is part of Bradford Museums, Galleries and Heritage's collections.

Arpana Caur was born into a Sikh family in Delhi, in 1954. She is largely a self-taught artist and her paintings tend to be figurative rather than abstract. Much of her work explores the situation and role of women in Indian society. She draws inspiration from Indian folk-art, Punjabi folk literature, and the writings of her mother, the award-winning novelist Ajit Caur. Arpana’s work has been exhibited all over the world and she has won many awards. 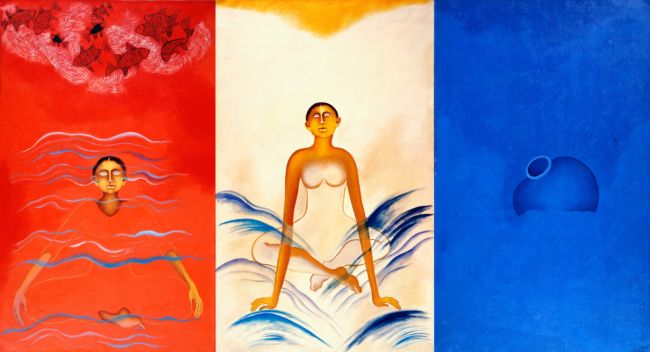 The oil painting 'Immersion, Emergence', made in 2001, is just one of many works that Arpana Caur has based on the story of Sohni and Mahiwal.

As with 'Romeo and Juliet' and 'Tristram and Isoude', this is a tragic tale of doomed love. It tells the story of a young potter called Sohni who falls in love with Izzat Biag, a rich trader from Bukhara.

When Sohni’s parents make her marry another potter, the merchant becomes a buffalo herder, (hence the name 'Mahiwal meaning 'buffalo herder) and lives as a hermit in a hut on the other side of the river Chenab. The lovers continue to meet by swimming the river. However, when Sohni’s sister-in-law discovers this, she swaps the fired pot that Sohni uses as a float for an unbaked pot. The next time that Sohni attempts to cross the fast-flowing river, the pot dissolves and Sohni drowns. Arpana Caur’s painting depicts the immersion of Sohni’s body in the water and the emergence of her soul.