John Wharlton Bunney (1828-1882) was a highly talented painter of landscapes and architectural views. He spent most of his artistic career in Italy. Bunney studied at the London Working Men’s College, where he came under the influence of one of his teachers, John Ruskin. Ruskin was a hugely influential artist, poet, social and cultural critic, conservationist, and generous patron to the arts. As well as championing the Pre-Raphaelites and the gothic style in architecture, he was also a major influence on William Morris’s Arts and Crafts Movement and the founding of the National Trust. Bunney acted as Ruskin’s agent in Italy, fulfilling Ruskin’s many commissions for architectural drawings and watercolours. 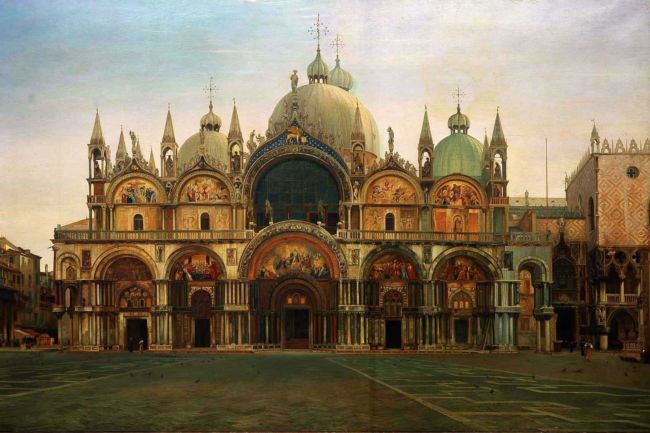 The oil painting “Façade of the Basilica of San Marco, Venice” (1877-82) is regarded as Bunney’s greatest achievement and, once again, we have John Ruskin to thank for it.

Ruskin had been instrumental in a campaign to prevent modifications to the West Front of St. Mark’s and he had challenged artists to copy it.

Bunney devoted the last five or six years of his life to meeting this challenge. His vast canvas recently formed the climax of Tate Britain's Ruskin Centenary Exhibition.

This painting is part of Museums Sheffield's collections.