Edna Manley (1900-1987) was born to a Jamaican mother and an English father. After studying art at Central St. Martins School of Art in London, she married her cousin Norman Manley and moved to Jamaica. Norman was an important figure in the struggle for Jamaican independence from British rule: he became leader of the People’s National Party and in 1955 he was elected Chief Minister of Jamaica. Edna mirrored her husband’s achievements in the cultural world. Her aim was to create a national vision and a sense of pride in the Jamaican people.

Although she began her career sculpting with clay, Edna was inspired by Jamaica and particularly by the raw materials that she found there. She began to carve figures out of native woods. 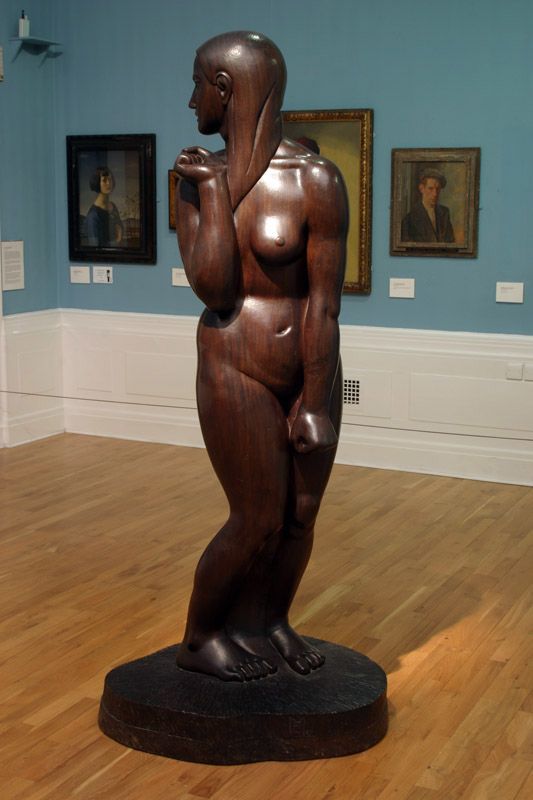 The 1929 sculpture “Eve” is carved out of dark mahogany. It is a smooth, full-bodied figure. This suggests strength and stability, making Eve a positive vision of womanhood and an ideal mother for humankind.

Edna Manley has herself been called “the Mother of Jamaican art”.

In addition to her celebrated art works, she was a founding editor of the Jamaican cultural journals Public Opinion and Focus. She established the National Gallery of Jamaica and her determination to organise art classes for Jamaican people led directly to the founding of the Jamaica School of Art in 1950. The school has since been renamed the Edna Manley College of the Visual and Performing Arts in her honour.

This sculpture is part of Museums Sheffield's collections.