Cloisonné is formed by different colours of enamel, separated by thin metal strips fixed along a pattern. The art came to Japan from China, although some research suggests that the earliest use of the technique was in Cyprus well over 3000 years ago.

Chinese cloisonné dates back over 700 years and came to prominence during the Ming Dynasty (1368-1644).

Although artists in Japan used the technique late in the 16th Century, the 'Golden Age' of Japanese cloisonné lasted from around 1880 to 1910. The one shown dates from around 1800.

The production of cloisonné is a sophisticated and extremely time-consuming process. Firstly a design is traced onto a base object, made of a metal such as copper. Then thin metal wires are placed over the design and soldered in place. These divide the surface of the object into different sections ('cloisons' in French). Different coloured enamel pastes are then painted into these areas. When the vase is fired in an oven, the enamel bonds with the metal. It can then be polished to form a smooth surface.

Technical innovations towards the end of the 19th Century eventually allowed Japanese artists to produce cloisonné without using wires. Their designs could therefore be more sophisticated and fluid.

This vase is part of Museums Sheffield's collections.

This Musha-e ('warrior picture') shows two samurai from rival clans, locked in violent struggle during the Gempei War – a civil war in medieval Japan, which lasted from 1180 to 1185. The samurai on the left, Yoshitada, is trying to cut off his opponent Kageisha’s head with his short sword. The diagonal lines radiating downwards draw us into the centre of the struggle, whilst the asymmetrical composition and the contrasting blues, oranges and browns provide a sense of energy and movement. 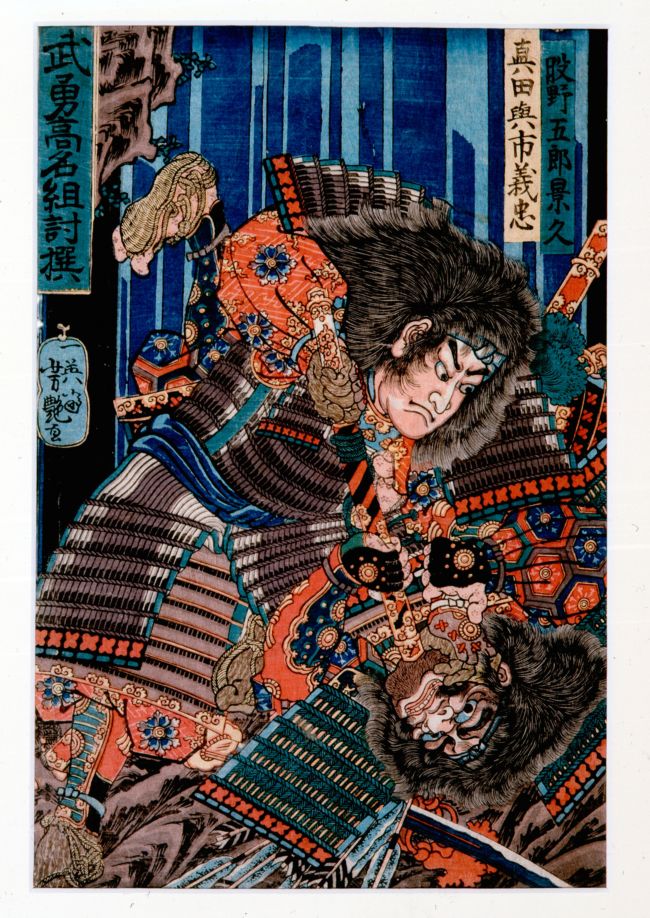 This is Ukiyo-e woodblock print, made in 1857 by carving the design onto a block of cherry wood. Ink was then painted onto the block and a sheet of damp paper pressed over it. There were different blocks for each colour. Woodblock printing allowed a team of publishers, designers, woodcutters and printers to mass-produce affordable artwork.

Ukiyo-e prints were like today’s posters and they often showed subjects from the world of entertainment such as beautiful women and popular actors.

However, the time was right for producing warrior pictures. By the 1850s the long phase of Shogun rule was coming to an end and there was general anxiety about the growing influence of Western culture. Prints such as this expressed pride in Japanese history and culture.

This print is part of Bradford Museums, Galleries and Heritage's collections. You can learn more about the art of Japanese woodblock printing, and look at this picture in detail in another My Learning resource: Japanese Woodblock Print.

Netsukes are a type of small Japanese sculpture with a very practical function. They date back to the 17th Century; they fastened the cord sagemono (a small container) to the obi (a sash). This was done as there were no pockets in the traditional Japanese dress of kimono or kosode. So if someone needed to carry money, tobacco, or medicines they had to carry them in small pouch, a woven basket or even a small wooden box. 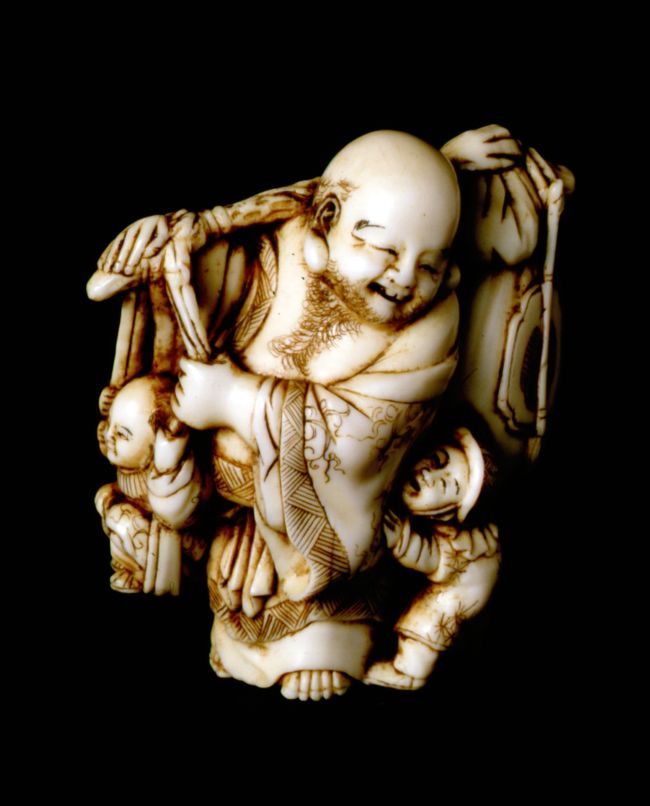 The word netsuke comes from two words ‘ne’ meaning root, and ‘tsuke’ meaning to hang. This refers to the roots and twigs that were used before netsuke started to be carved. This old tradition still occurs today, with an increasing range of materials being used in their production.

Ivory was a very popular choice of material but the use of ivory became illegal.

Boxwood is still used today, as well as metal, hippopotamus tooth, clay, porcelain and lacquer. The one shown is made of ivory and dates from the 19th Century.

This object is part of Bradford Museums, Galleries and Heritage's collections.