This resource is part of the Museum Snapshot collection- a collection of smaller resources perfect for starters, plenaries or spare moments to explore something fascinating.

This is an axe dating to the Neolithic period. It is made from a type of hard stone called jadeite. It was found at Wroot in the Isle of Axholme in North Lincolnshire. It is thought that Neolithic peoples considered certain stones sourced from difficult to reach places, such as high up mountains, to have special supernatural powers. Perhaps they thought a little bit of that supernatural power would rub off on whoever owned a Jadeite Axe. 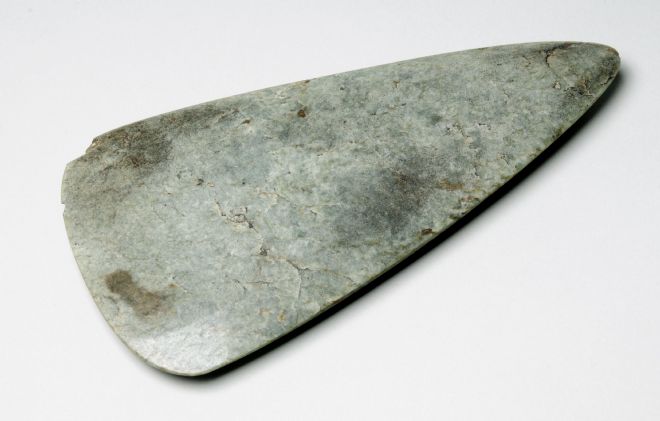 It is a beautiful, highly polished object and it would have taken a long time to make – days rather than hours.

During the Neolithic age, axes made from stone and set into a wooden handle were a key part of humans toolkit.

At this time Britain was still heavily forested and humans used an axe to chop down trees and to clear the landscape for farming. However, some axes seem to have had special significance and rather than being intended for use, they instead have some ritual importance. Jadeite axes are one of the types which have this special significance. Rather than being used for chopping down trees, they were status symbols which showed their owners power and prestige within their community.

Jadeite axes have been found throughout Europe and there are over a hundred known of in the British Isles. However, Jadeite does not occur naturally in Britain. Recent analysis has revealed that the Jadeite was sourced from the North Italian Alps around 4,300 BCE. The finished axehead then made its way to North Lincolnshire around 3,900 BCE.

The Wroot Axehead was made in Italy and travelled across Europe to be buried at Wroot in North Lincolnshire. It shows us that people in Britain were not on an island cut off from the rest of the World, that we have long been part of a Europe-wide trading and contact network. It also tells us that Neolithic people could appreciate beautiful things and that their lives weren’t just concerned with the daily graft of getting enough to eat and staying alive.