In the past mice and rats were common intruders in people's homes and many different ways of trapping unwanted rodents were tested. Although not as common today as they were a century ago, mousetraps are nevertheless an item of equipment that most people will recognise.

James Henry Atkinson, an ironmonger from Leeds (born 1849) invented the design that we are most familiar with today. He filed applications for patents on several different inventions, but the one he is most famous for is his mousetrap (Patenet reference: GB 13277 of 1899).

A simple but effective design

After making a number of versions Atkinson eventually came up with the 'Little Nipper' trap. It consists of a wooden base upon which sits a simple spring mechanism. When a mouse attempts to take the bait (the bait is placed on the spike marked 'i' in the diagram above), the movement triggers the spring. Atkinson wanted to avoid the risk of the trap going off prematurely, but also needed a powerful snapping action, which he achieved with a spring; its speed has never been bettered. 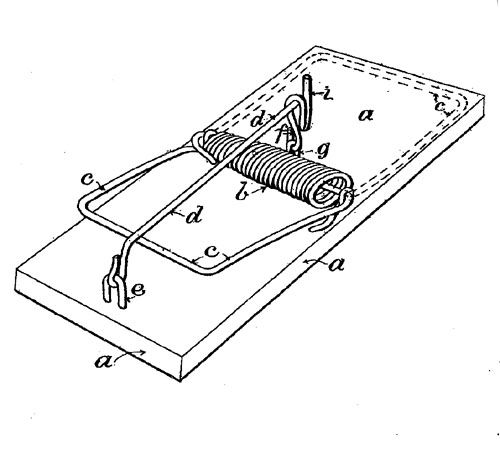 Atkinson made the traps himself but later sold the rights to a Welsh company, Procter Brothers, for a significant sum. The company still make the traps today. Atkinson died in 1942.

Means of trapping pests continue to interest designers and inventors and many patents are still filed on the subject (including means of drowning and electrocuting the mice and also trapping them humanely) but no-one else has managed to come up with a more successful trap and the Little Nipper still holds 60% of the mousetrap market.