During the Eighteenth Century, the poor state of the roads across Britain led to the development of tramroads. These were initially tracks of wood or iron on which wagons could be pulled.

However, the wooden constructions wore and split and the iron rails bent. The introduction of cast iron led to a more stable track. In Britain the first 'street' tramway to transport passengers was laid by George Francis Train in Birkenhead in 1860. By the end of the decade there were so many applications for new tramways that the 1870 Tramways Act was brought in.

The Act caused some difficulties for the tramway operators – for example they were responsible for the maintenance of the roadway between the tracks and for a certain distance on either side, despite the operators argument that trams caused less wear than other road vehicles.

By the end of the nineteenth century Britain was lagging behind the example set by the US (where tram lines had been established since the 1850s) in the amount of tracks being laid. This was blamed on bureaucracy and also lack of vision and parochialism between local authorities.

Frequently neighbouring towns would use different systems and different track gauges which meant that the trams could not run straight through from one town to the next. Rivalry increased the problem and disputes were common. In 1880 the Bradford Corporation were granted powers to run a public tramway, and they in turn gave a 21 year lease to the 'Bradford Tramways and Omnibus Company', a private company, to operate the service.

In the same year Leeds locomotive firm Kitson & Co – who had been building railway locomotives for many years - built the first steam tram for the Leeds Tramway Company. James Kitson had established the firm in 1837, opening his engineering workshop in Hunslet. Airedale Foundry grew steadily over the next 80 years, as did the firm's reputation both nationally and internationally as they exported locomotives throughout the world. 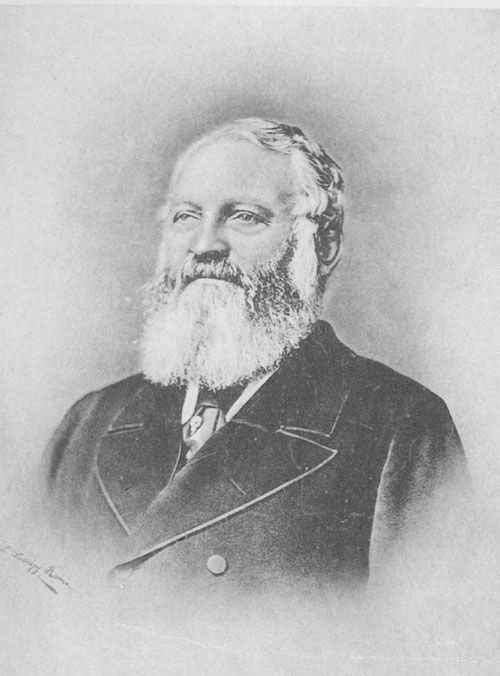 Kitsons obtained a number of patents relating to locomotives and tramways. Patent GB 1178 of 1878 proposed an arrangement of the driving gear of trams, enabling easier access for the driver, while at the same time enclosing the working parts in order to protect them from mud. Mud and dust were a great problem for trams and their working parts at that time.

Further improvements in the working of the valve gear followed a year later (patent reference: GB 4512 of 1879). This patent also focuses on controlling the speed of the tram and automatic braking. The Board of Trade had brought in a law requiring tram brakes to activate automatically once the tram reached 10mph.

Using their experience of locomotive engines Kitsons were able to introduce a series of innovations to trams, further bolstering their already well-established reputation. The 'Kitson valve gear' became widely known and used. 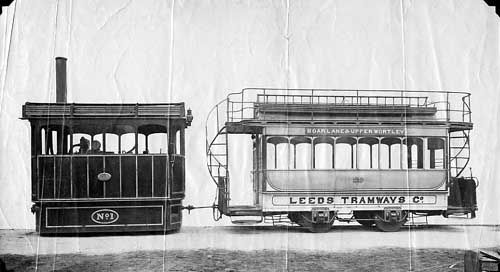 Kitson and his sons ran the firm but in 1880 Richard Clere Parsons, son of the Earl of Rosse, President of the Royal Society, became a partner, a position he held until 1887. He was very interested in steam trams and he persuaded his brother, Charles Algernon Parsons (who had completed an engineering apprenticeship with Armstrong and Co on Tyneside), to begin work with Kitsons in Leeds. 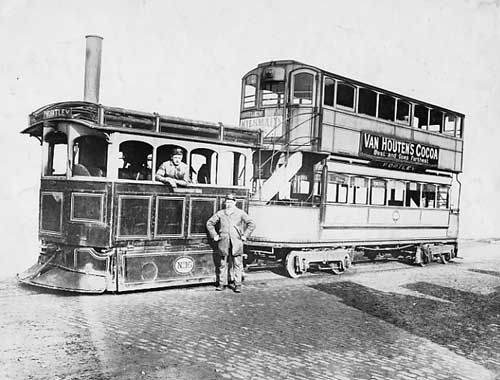 C A Parsons' first commercial engine was constructed at the Airedale Foundry. He even developed and manufactured torpedoes which he tested out in Roundhay Park lake early in the morning. But it was while in Leeds that he began thinking about a different method of power.

He wanted a high speed engine and later stated that it was his time with Kitsons in Leeds that made him realise that he was unlikely to achieve the power he wanted with the reciprocating engines (which use pistons to convert pressure into rotating motion) which were in common useage. It was his work with steam tubines which was to make his name.

Parsons went on to form the company C A Parsons & Co., based near Newcastle, to develop marine steam turbines. He designed and patented the steam turbine and demonstrated it with devastating effect at the Spithead Naval Review in 1897. In front of the Queen, naval command and numerous British and foreign dignitaries, Parson's boat, the Turbinia - the world's first steam turbine driven vessel - raced through the lines of naval ships and no other vessel could catch her. Such was the effect that within a relatively short space of time, most ships converted to steam turbines.