Middleton Woods is located in south Leeds, between the M621 and Dewsbury Road.

Middleton Woods is the largest remaining ancient woodland site in West Yorkshire and is of special importance for nature conservation in Leeds.

Oak trees dominate the woodland, but there are other species including birch, hazel, elder, sycamore, beech and sweet chestnut. It is not just living trees that are important - old, dying and dead trees, rotting, fallen timber and decomposing leaves all provide food and shelter for a wealth of invertebrates, particularly woodlice, spiders, millipedes and beetles. In a food chain, these are eaten by mammals and birds including bats, mice and voles and woodpeckers and treecreepers. In early spring there are abundant wildflowers with bluebells, wood anemone, wood sorrel and lesser celandine covering the ground.

The area was not always as pretty as this. The parkland is on a rich coal seam and in the 1600-1700s the area was covered in coal mines. You can still see areas of exposed coal in the area between the playground and The Clearings. The coal mines started as Bell Pits, which are made up of a short mine shafts. When the coal is less than 10 metres (or, about the height of an average house) below the surface, it makes sense to dig several short shafts down to the coal seam. From the bottom of each shaft, the coal is removed in circle until the roof is about to collapse. That shaft is then abandoned and work moves to another short pit shaft nearby. The Middleton Little Seam was mined in this way and although it was only 80cm wide, a single Bell Pit was producing 100 tons of coal, or the equivalent of 1000 pack horse loads. There are not many Bell Pits in Middleton Park, but a few collapsed shafts, which look like craters or hollows, can be seen from the path between Middleton Railway and the playground. 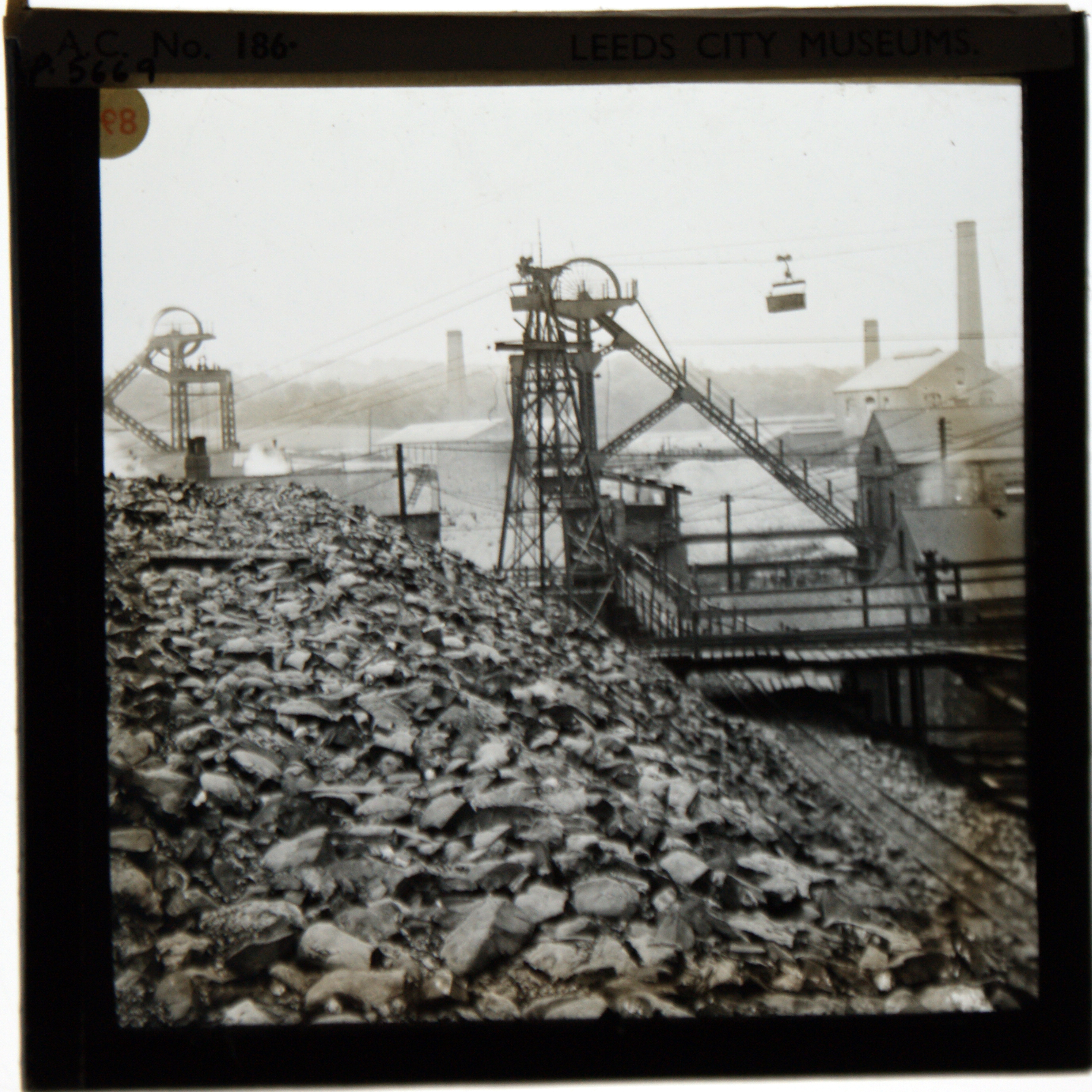 By the 1760s, this area had some of the earliest deep mines in Yorkshire. The coal was too deep for bell pits, so 45 metre deep shafts were sunk and tunnels dug into the Main Middleton coal seam. The coal seam was wider at this depth, being about 1.2 metres high. The shafts were dug using pillars of coal for roof support – called ‘Pillar and Stall’ working. Shafts were sunk at approximately 50 metre intervals. Horses were used to raise and lower men and coal up the shafts using a ‘Cog and Rung’ Gin, a simple form of pit head winding gear. Over the shaft is a winding cylinder, which winds the rope up and down like a bucket over a well. Instead of the gear being turned by hand on a well, the sideways turning force is changed to up-down turning force through cogs which are driven by the horses. Have a go at making a small one in class with cogs to investigate forces!

There is a reconstruction of a horse Gin behind the Visitor Centre in Middleton Park. They were an effective mechanism. In the 1780s Richard Humble, the Colliery Manager, recorded that two horses could raise 15 corves from a depth of 140 yards. A corve of coal weighed three and a half hundred weight (175 kilograms).

In 1758 there was a serious explosion in one of the shafts.

Gunpowder was used to blast through hard stone while deepening an old mine shaft. ‘Fire Damp’ (methane) had built up in the old mine galleries and was ignited by the gunpowder explosion. It devastated the pit head workings and shook the whole wood. We don’t know how many men were injured. As the shaft collapsed, it caused many of the trees to lean towards the pit. Other men working in the woods more than a quarter of a mile distant, were so alarmed that they vowed never again to set foot in the wood when blasting was in progress.

In the late 1700s, steam power arrived and the colliery had a Newcomen steam engine to raise water out of the mines and prevent flooding, which was a major risk to the miners.

The Wood Pit, towards the Ring Road side of the park, was sunk in 1813–1814 and was worked until sometime in the late 1890s. This was the last working mine within the woods. Large parts of the park were shaped by this part of the history. The pool we have today was created to supply water to the steam engine at the pit head and the paths to Middleton Railway were wagon ways to send the coal to market via the railway.