Brief History of the Association of Chief Police Officers

The Association of Chief Police Officers (ACPO) was established in 1952 to organise social events for senior police officers. It became a way for regional police forces to share ideas and was a platform for them to discuss legislation and policing policy (advising the government on a variety of policing issues). Over time it became more involved in giving responses on behalf of the UK’s senior officers to official enquiries and reviews.
Following the Police Act of 1964, ACPO became more involved in helping police forces to coordinate and cooperate with each other. It began to have an impact on policing policies nationally. Although ACPO gave advice to chief officers, any final decisions were made by individual Chief Constables. 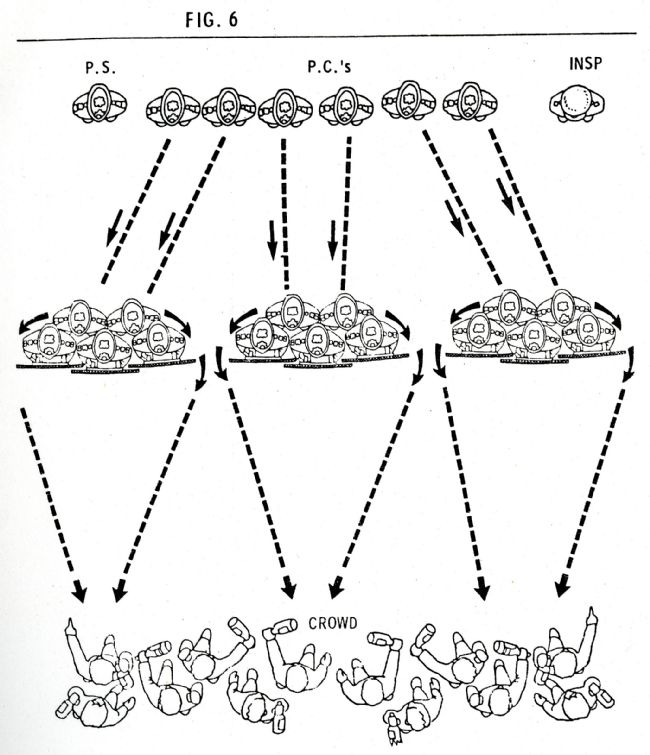 Illustration Showing Police Tactics Used Against Rioting Crowds 1980s
In later years, ACPO increasingly became the voice of the police service. They would appear in the national media speaking on behalf of the police, issue press releases and publicity materials which highlighted a positive image of the police service. The Association worked independently of but also alongside the Home Office, local Police Authorities and other police staff organisations on matters affecting the police service. These included crime, technology, staff training, quality of service, traffic, and staff employment issues.
In April 2013, following an independent review into its structure, function and value for money, ACPO was disbanded.
The archives of ACPO are held at the Hull History Centre and all images within this resource are taken from their collection. The collection of archives is mainly made up of notes from meetings, letters, newspaper cuttings and planning documents.
Some of the more interesting material in the collection relates to public disorder; riots, protests and dealing with public events which could sometimes lead to public disorder like football matches and industrial disputes. These resources discuss the ACPO point of view on these issues.

Regional – local, rather than national

Review – official look into something that has happened

Disbanded – taken apart and shut down