The Miners’ Strike of 1984-1985 was an attempt by miners to stop the National Coal Board (NCB) and the government of Prime Minister Margaret Thatcher shutting down collieries (mines).
By the early 1980s the collieries were losing money. The government announced on 6 March 1984 that 20 collieries would close, meaning that many mining communities would lose their main source of employment. Many of the richest coal fields had been worked out and the number of miners had been decreasing over the previous few decades. After successful strikes in 1972 and 1974 which prevented pit closures, calls were made for strikes in the early 1980s, eventually leading to the strike of 1984-1985. Miners across Yorkshire began strike action and on 12 March, a national strike was declared by the NUM, but no official vote was held.
The government had already stockpiled six months worth of coal before the strike, anticipating that a strike might be coming. The National Recording Centre (NRC), founded by the Association of Chief Police Officers for England and Wales (ACPO) in 1972 helped the government prepare for the organisation of police units travelling to areas of protests and in figuring out how to deal with flying pickets (strikers who travelled to different areas to protest).
A greater number of miners came out on strike in Scotland, Yorkshire (where the strike had started following the closure of Cortonwood Colliery), North East England and South Wales. There was less support across the Midlands, and Nottinghamshire, in particular, was targeted by flying picketing in the hopes of preventing local miners from going in to work. During the strike, there were violent clashes between flying pickets and the police. Strike-breakers in the militant areas were not easily forgiven for breaking the strike and going against the community. 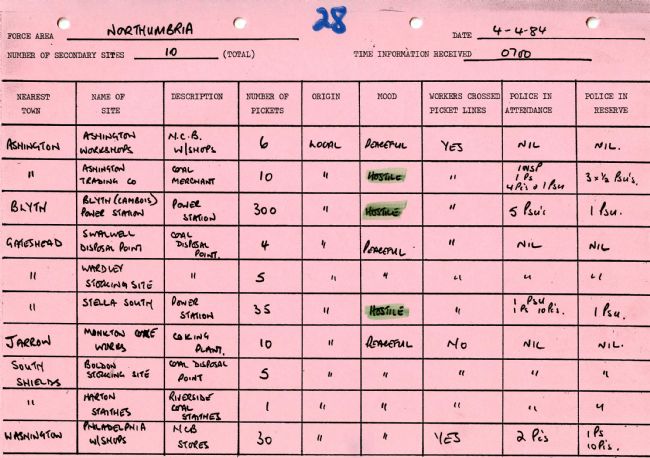 Police Incident report from Northumbria, 1984
Other miners' strikes in the 1970s had caused the public a lot of trouble, as there had been power cuts, but this time the government had prepared well. Some miners began returning to work from September, with many more returning by January as union pay ran out and some found it hard to pay for basic necessities. The strike officially ended on 3 March 1985. Despite the miners’ efforts, the government succeeded and in the end most of Britain’s coal mines were closed. 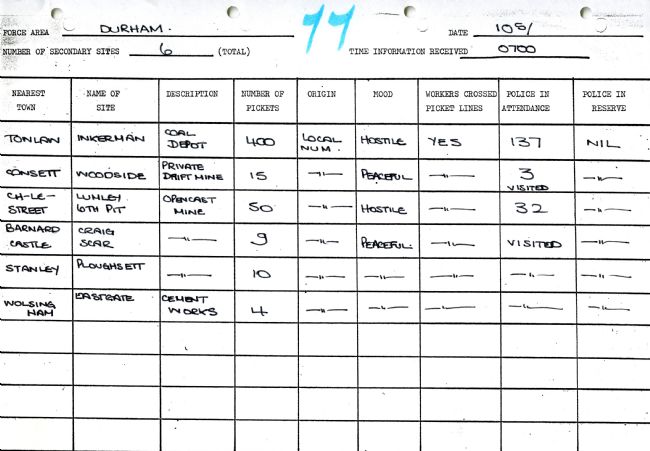 Most pickets throughout the strike were non-violent. However, violence against working miners was reported from the beginning. Police action during the strike has also been criticised, for instance, in South Yorkshire complaints were made against police for unnecessary property damage caused whilst engaging with pickets. There was also criticism of police action at the ‘Battle of Orgreave’ in June 1984 where policemen were caught on camera seemingly using ‘excessive force’ against strikers. 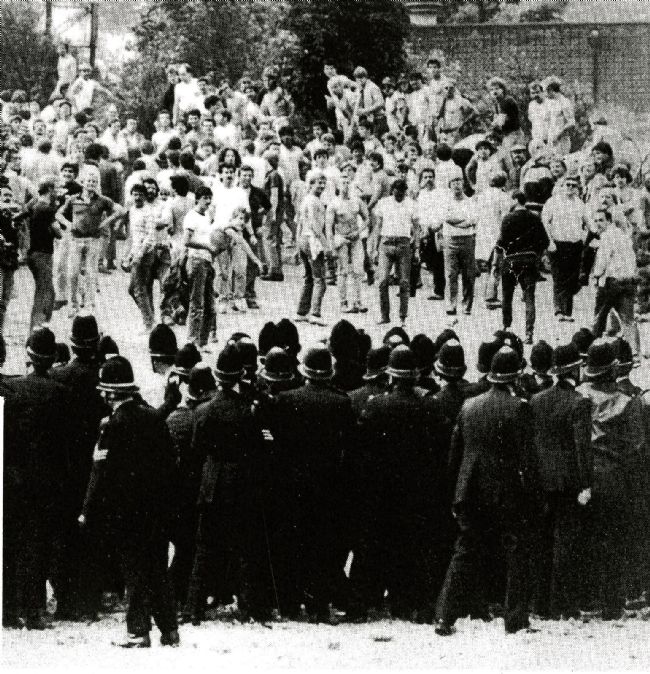 Police Clashing with Miners During the 1984 Strike
A number of lawsuits were brought against South Yorkshire police and eventually they were forced to pay out compensation.

After the strike, statistics showed over 11,000 people had been arrested, just over 8,000 of which had been charged, but only 150-200 were given prison sentences. You can download a list showing the occupations of people arrested in Nottinghamshire between March 1984 and March 1985.
Calls for a further strike in 1986 were ignored and from 174 collieries in 1983, only six remained in 2009. In December 2015, the last deep colliery in Britain closed.

Colliery – coal mine and buildings associated with it
NUM – National Union of Mineworkers
Strike breaker – someone who works during a strike
Strike – organised (often by a union, but not allowed by the employers) stopping of work by employees
Flying pickets – strikers who moved around the country to protest at different striking mines
Picket line – boundary at a place of work made by strikers, to stop strike breakers from entering
Next section