Below is the script from the film that accompanies this learning resource.  The film can be viewed here. 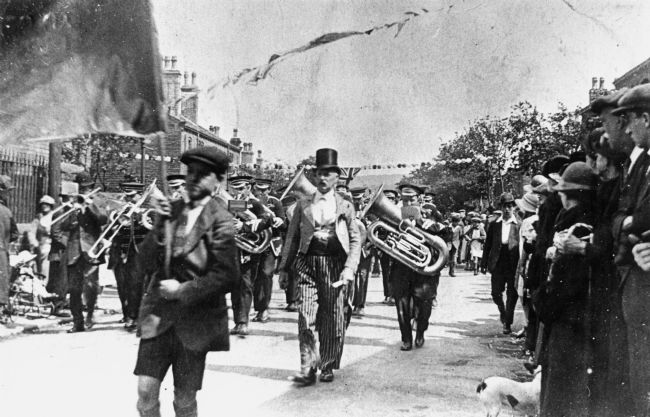 A Procession in a Street for the 1910 Labour party in Huddersfield.

This film is about the politics collections in the archives at Heritage Quay. The collection reflects the growth of the Labour movement through the stories of Huddersfield men and women, who were active locally all the way to Westminster. Some rose to eminent positions in Parliament, others became well known as campaigners and writers, pushing for social change.

This is Robert Blatchford, a journalist and campaigner who did many things to try and alleviate the poverty and misery he came across in northern towns. He set up Cinderella Clubs to provide hot meals for poor children and Clarion Cycling Clubs where working people could get out into the countryside together. Robert Blatchford was an early supporter of the Independent Labour Party and founded a publishing company as well as the Clarion newspaper, which campaigned for better conditions. All of these organisations survive today.

This is John Henry Whitley. He was a Halifax mill owner who was a Liberal MP for nearly 30 years. During that time he achieved many social and industrial improvements for working people. J.H. Whitley became Speaker of the House of Commons and gave his name to Whitley Councils.

What can you find out about Cinderella Clubs and Whitley Councils?

This is Victor Grayson. Despite having a stammer as a child, he grew up to become known as England’s Greatest Orator. Huge crowds would turn out whenever he spoke in public. He was a radical speaker, known for his rousing words and witty responses to hecklers. He supported votes for women and the abolition of the House of Lords. He was a friend of Robert Blatchford and felt passionately about the plight of working people.

Can you find some of Victor Grayson's speeches and compare them with those of today's politicians? What do you notice?

In 1907 Victor was elected as the Independent Labour Party candidate for Colne Valley. The Labour Party had been formed the year before, and had 29 MPs in the House of Commons. They wanted Victor to join their group but he refused. He continued to make controversial speeches and once called his fellow MPs “a house of Murderers” because they refused to hold a debate on unemployment. He remained popular with the voters– he was voted Yorkshire’s most popular MP in 1908.

Victor’s parliamentary career came to an end in 1910. He founded the British Socialist Party, and tried to make a living by writing and giving lectures, but was unsuccessful. After being invalided out of the army in 1918, and following the death of his wife in childbirth, Victor was short of money. Despite this, he led a luxurious lifestyle. He dined out, smoked expensive cigars and lived in an expensive part of London. There were many rumours about how he could afford all this. In 1920, Victor was seen leaving his apartment with two strange men and carrying two suitcases. Victor was never seen again. For almost 20 years there were unconfirmed sightings of him, both at home and abroad, but his disappearance remains a mystery.

Which of these politicians do you think made the most significant contribution to the labour movement?

Can you find out more about Victor Grayson's life? What do you think happened to him?

You can find out a lot more about politics here at Heritage Quay .