Sargent was raised in Italy by his American parents. His talent for drawing took him to Paris where he spent ten years painting the French gentry. When his famous painting Madame X was badly received, Sargent moved to London.

He became a portraitist to the rich and famous in both Britain and America. He enjoyed this status for over twenty years before shocking his audience by announcing that his remaining years would be devoted to landscape and mural studies. 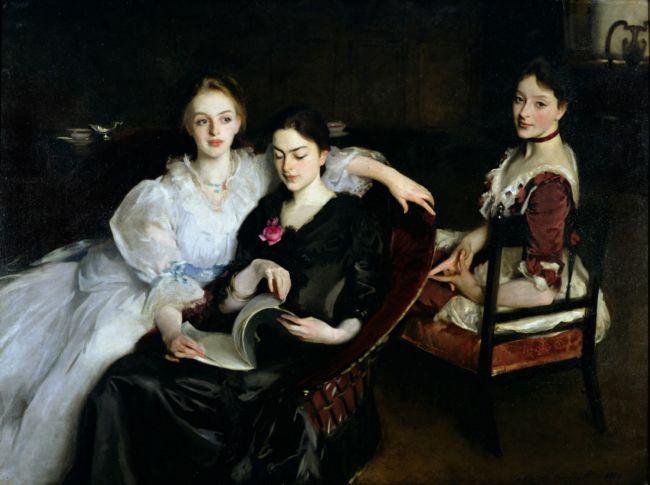 This group portrait was painted to mark the twenty-first birthday of Mabel Frances Vickers (centre). She is shown with her sisters Florence, aged 18, on the left and Clara, aged 19, on the right.

The portrait was unusual for the time, showing the sitters in informal poses and subdued lighting. When Sargent showed the painting at the Paris Salon in May of 1885 the critics snubbed it. The following year in London at Royal Academy's exhibition it was voted the worst picture of the year by a visitors' poll.

The contrasting expressions and poses of the three sisters give the painting an atmosphere of tension. This is amplified by Sargent's use of perspective, which projects the figures forward out of the dimly lit room they occupy. This portrait was painted at the Vickers' family home in Bolsover Hill, Sheffield.