The Context for Pride

The act of penetrative sex between men, or sodomy, had been illegal in Britain since 1533 and sodomy between men was punishable by death until 1861. Although prosecutions were difficult due to the need for sufficient evidence, over 50 men were hung between 1800 and 1835. In 1885, as part of the Criminal Law Amendment Bill brought in to outlaw sex between men and underage girls, the Member of Parliament Henry Labouchère introduced an amendment making any homosexual act ‘an act of gross indecency’. This amendment required no evidence to prosecute and did not define ‘gross indecency’. There were no laws prohibiting sexual acts between women, though attempts were made to add an amendment to this effect in the 1920s.

This amendment was still in place until 1967. Britain had some of the strictest laws regulating same-sex acts between men in the world.  In 1957 The ‘Wolfenden Report’ was commissioned by the government. This was a report on prostitution and same-sex acts from a parliamentary committee, which was chaired by Lord Wolfenden. The Report recommended the decriminalisation of homosexual sex acts between consenting male adults (defined as over 21). 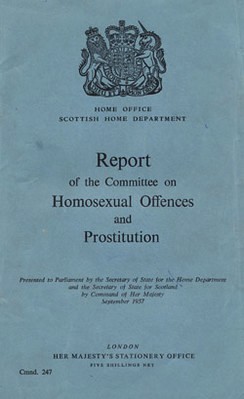 Front Cover of The Wolfenden Report

In 1958 the Homosexual Law Reform Society (HLRS) was founded to campaign for the implementation of the reforms in the Wolfenden Report. The Albany Trust was set up to campaign against homosexuality being categorized as a mental health disorder and the terrible treatment of LGBTQ+ people in psychiatric treatments, like conversion therapy. These organisations, along with the North Western Law Reform Committee from 1964, lobbied for a change in the law.

The Sexual Offences Act in England and Wales in 1967 decriminalised sexual acts between consenting men over the age of 21, if the acts were carried out in private. The 1967 Act was only a ‘partial decriminalisation’.

Men making their sexuality visible and being affectionate in public – for example kissing each other – could still be arrested for causing a breach of the peace or ‘gross indecency’.

In fact, there was increased police intimidation of gay men after 1967. In addition, the age of consent for heterosexual couples to have consensual sex was 16. The law was far from equal.

There was growing discontent in the UK, USA and elsewhere about the repression and criminalisation of same-sex relationships. For example, in 1966 there was a fight back against a police raid of a LGBTQ+ bar in San Francisco. On 28 June 1969 LGBTQ+ people fought back against police harassment at the Stonewall Inn in Greenwich Village, New York. The following month the Gay Liberation Front was founded in the USA and organized a march to mark Stonewall. A year later, a march was held in New York to remember and continue the momentum of Stonewall.

Activist Groups in the UK in the 1970s