Intentional Promotions: A Response to Section 28

‘Intentional Promotions’ was the brainchild of former Leeds residents Jackie Clayton and Rob Preston. Jackie was heavily involved in the Lesbian & Gay Society at Leeds University when Section 28 became law, and felt that something needed to be done to protest the Act. Intentional Promotions was purposely named after the ambiguous language of Section 28, but its message was anything but ambiguous.

'we called [the collective ] Intentional Promotions, which was specifically designed to intentionally promote homosexuality'.  Jackie Clayton 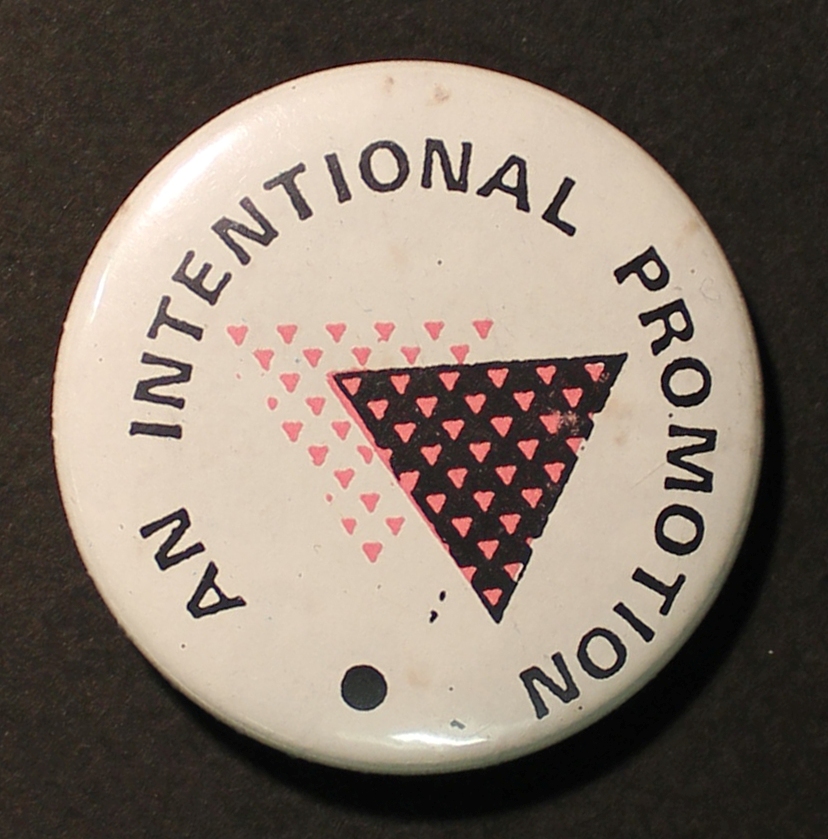 Their message was simple, and a direct challenge to the law. LGBTIQ+ people were not going to live their lives in shame, or hide away from society. The law was unjust and needed to be changed. Intentional Promotions became a stall, with Jackie and Rob travelling to universities around the country raising the profile of LGBTIQ+ issues through marketing materials such as leaflets and information, and selling pin badges to spread the word. They attended rallies and protests, handing out leaflets and selling their badges. 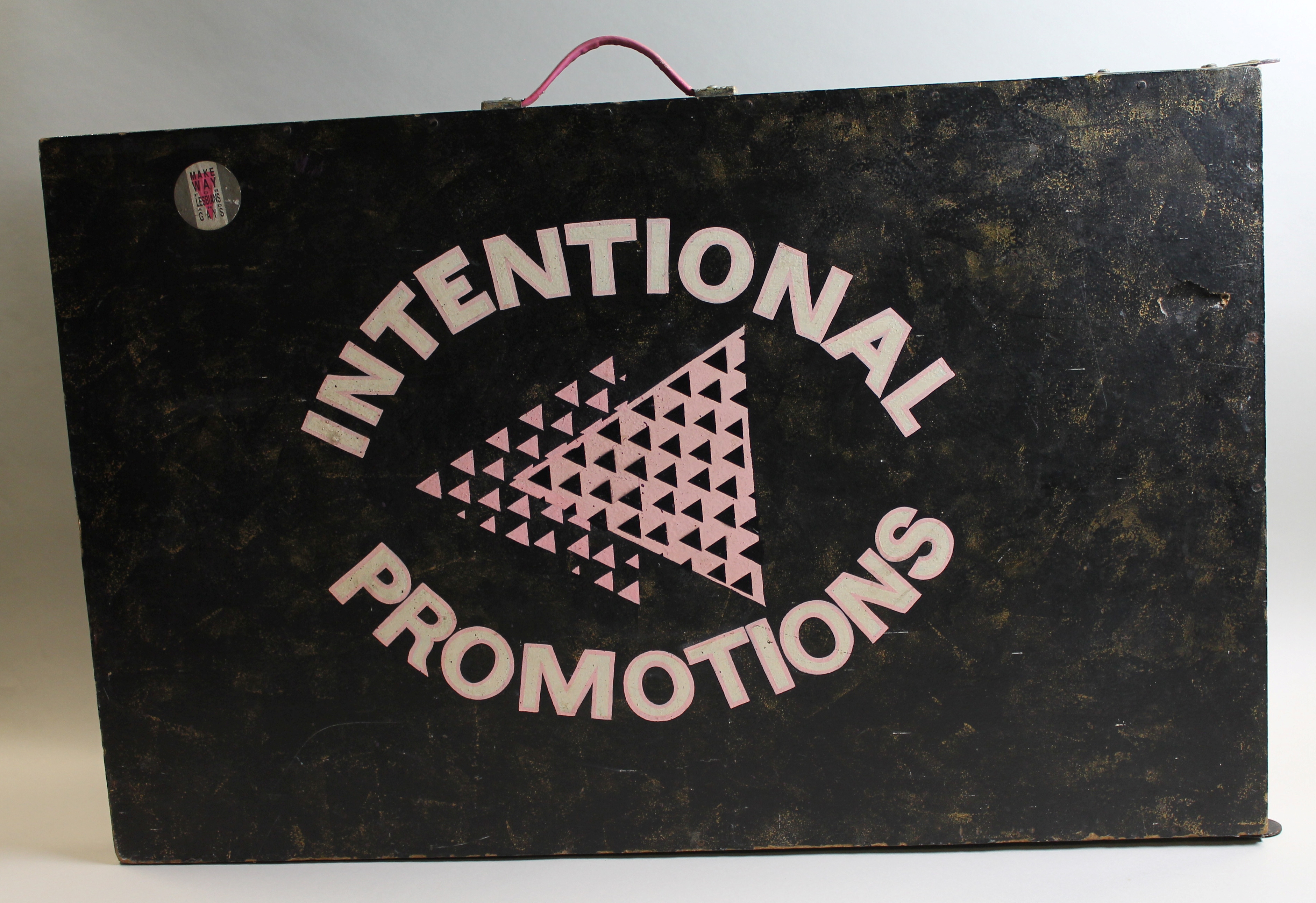 Jackie and Rob set up their stall using a collapsible pasting table, with the badges pinned to the inside of the table. The idea behind this was to allow for a rapid take down and run if they encountered trouble from the public or the police. 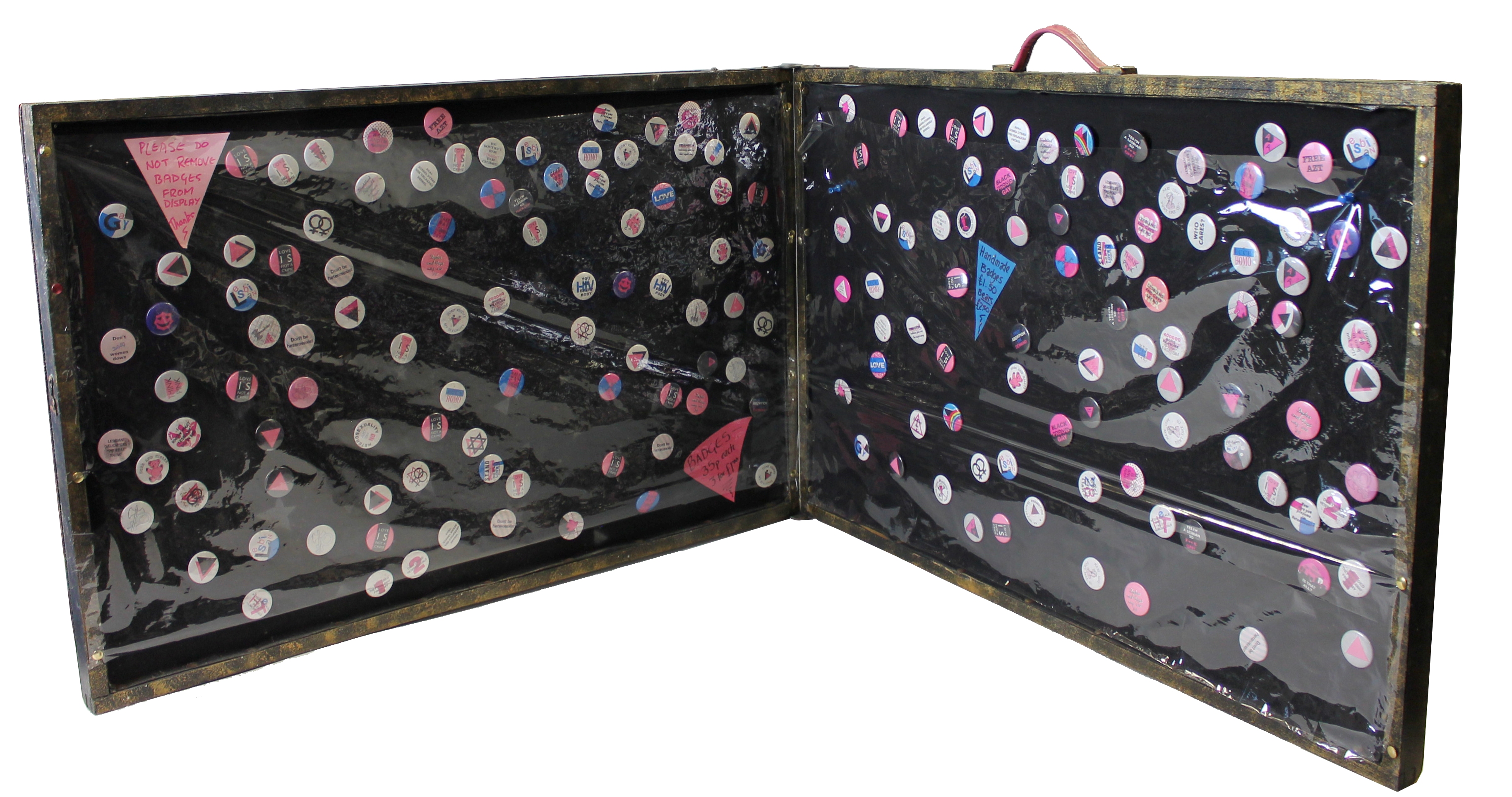 The pin badges were designed by Rob Preston, using ideas from members of the Leeds University Gay and Lesbian Society. They included a wide range of slogans and messages, designed to appeal to as many people as possible, including heterosexuals.

'There were so few of us willing to be out, we thought we need support from straights, or anybody else.

we were absolutely shocked when we set up the stall running, we thought we’d get beaten up, really. We did have some trouble, but we had enough people around and we were safe and we couldn’t believe how many people wanted to support us. That was a bigger shock. But they’d never had a chance to have a voice before.' Jackie Clayton, joint founder of Intentional Promotions 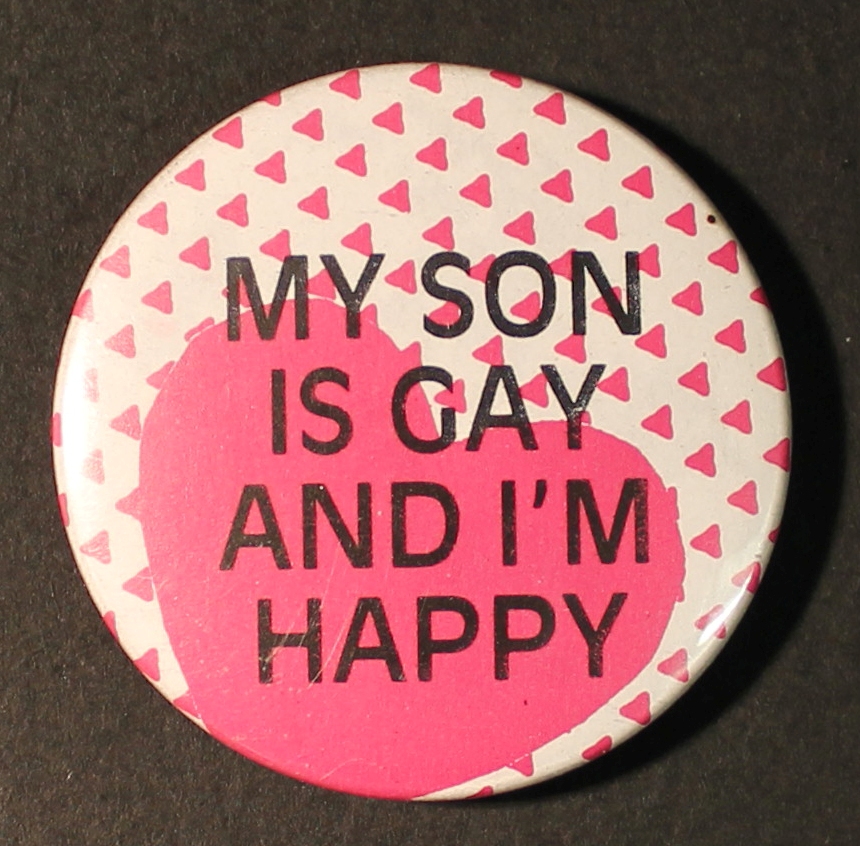 Jackie and Rob encountered many difficulties as they sought to spread their message through Intentional Promotions. For example, several print shops in the city refused to print their badges and flyers because of the content. They may have feared that there would be legal repercussions if they were seen to be helping the collective, or they may have been supporters of Section 28.

Luckily Rob was a graphic designer and was working at the Leeds University print shop at the time. He took on the design of the badges, and everything was printed in-house at the University. 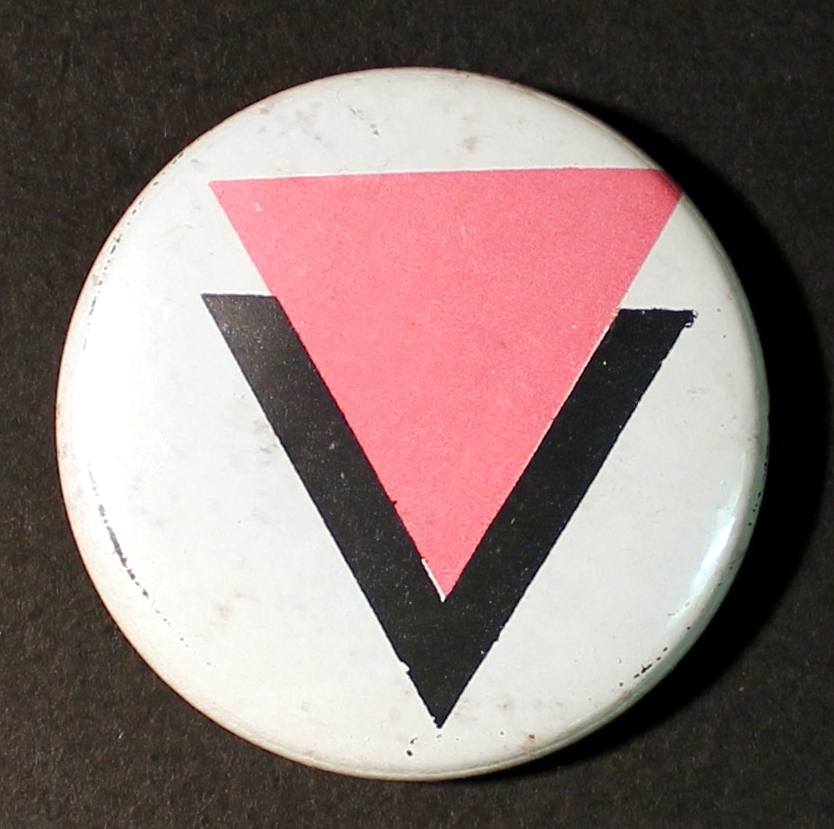 When travelling with Intentional Promotions, Jackie and Rob faced a constant threat of potential violence against them. They visited any university that invited them and always tried to ensure that they would have some kind of protection at events.

'We were lucky, because everywhere we went we organised security, which basically meant we were either near security people, official security people, or we had enough people who came to stand near us to make sure that there was a good enough crowd to support… it stops people beating you up if there’s 20 people stood behind you. I’m fairly sure it was Aberystwyth where we went where they got the rugby team –

'one of their guys was out in the rugby team and they were all friends with him, so the whole rugby team came in their uniforms to stand behind us while we did the stall for a couple of days, which is amazing.'  Jackie Clayton 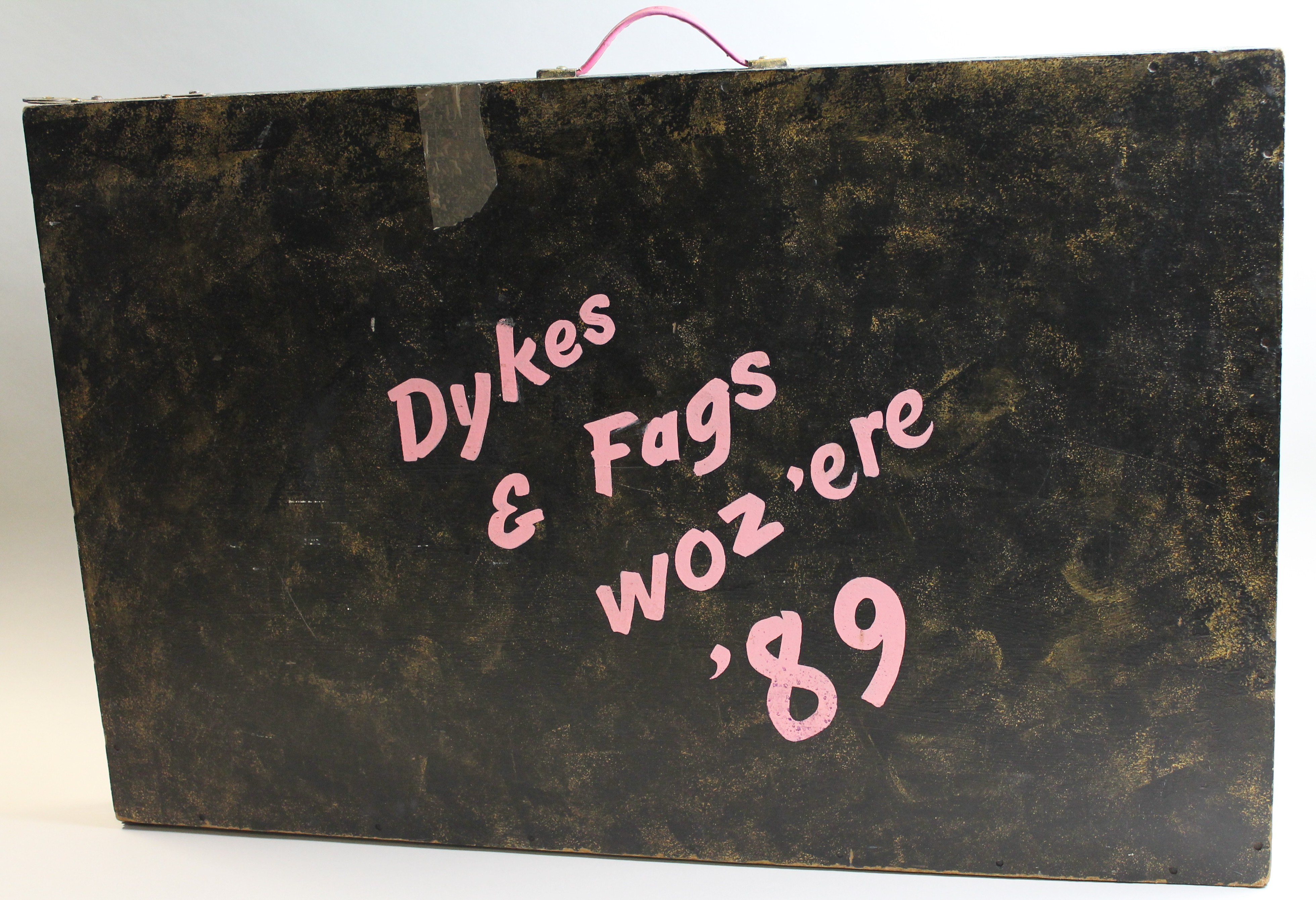 The Impact of Intentional Promotions

It is impossible to put any kind of quantitative measure on the impact that Intentional Promotions had. At a time when LGBTIQ+ people were being stigmatised, abused and discriminated against, the actions of Jackie and Rob provided a voice to those in the LGBTIQ+ community and showed them that there was a community to be part of. Many, if not all of these students would have been affected by Section 28 when they were at school.

With all local authority-run support for the LGBTIQ+ community withdrawn, Intentional Promotions provided a voice for all those concerned with the rights of the community.

It helped to spread awareness of the real and devastating impact that Section 28 had on people’s lives.