This is a Yorkshire World Collections object, one of 100 chosen by young people aged 16-24, as part of the London Cultural Olympiad programme Stories of the World.

This fore-part of a red deer skull with antlers has been modified so it could be worn. It dates from the end of the last Ice Age (about 8,000 BCE) and was found at a place called Star Carr near Scarborough, North Yorkshire. 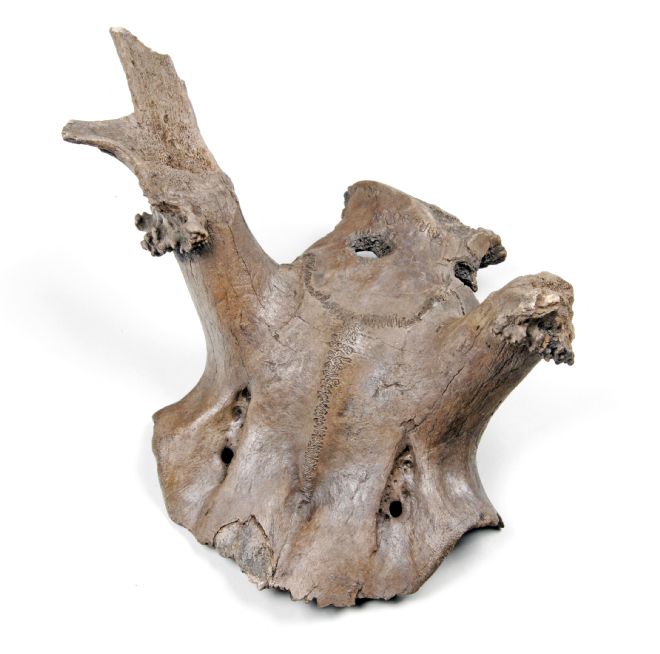 In 8,000 BCE, Star Carr would have been on the edges of a large glacial lake that completely covered what is now the Vale of Pickering. The deer frontlet, as it is known, was one of 21 frontlets discovered in an area that would have been under water.  The remaining 20 are in the British Museum, and archaeologists believe that the frontlets were deposited in the water as part of a ritual or religious ceremony. The frontlet would have been worn strapped to the forehead using strips of animal hide or sinew.

Archaeologists have discovered evidence of a thriving community living on the fringes of the glacial lake. Other finds include bone and deer antler harpoons, flint knives and arrowheads, dried funghi which may have been used as kindling, rolls of birch tree bark which could have been kindling or floats for nets used in fishing or catching wildfowl.

I love how something alive so long ago can teach us so much.
Jordon Keighley