Rumours of the counterfeiting reached the authorities, who appointed one William Deighton, an Excise Officer, to investigate the matter in 1769. One of the Coiners, James Broadbent, turned King's Evidence and betrayed his accomplices. Deighton arrested David Hartley. However, Hartley's brother, Isaac, offered £100 to anyone who would kill Deighton.

The plotters supposedly planned the murder in a pub at Mytholmroyd called the Dusty Miller, which still stands in the centre of the village today.

On the night of 10 November 1769, Matthew Normanton and another man called Robert Thomas ambushed the Excise Man at Bull Close Lane, near Halifax, and shot him in the head.

The Government was outraged and appointed the Marquis of Rockingham, Lord Lieutenant of the West Riding, to hunt down Deighton's killers. Rewards were offered for information leading to their arrest, as well as a free pardon to anyone except the killers themselves who wished to turn King's Evidence.

There were Coiners in other parts of Calderdale, too, and by the end of 1769 a list of 80 counterfeiters had been drawn up, 30 of them from Cragg Vale, 20 from Sowerby, 15 from Halifax, 7 from Wadsworth and 6 from Warley and Midgley. By Christmas 30 had been arrested. 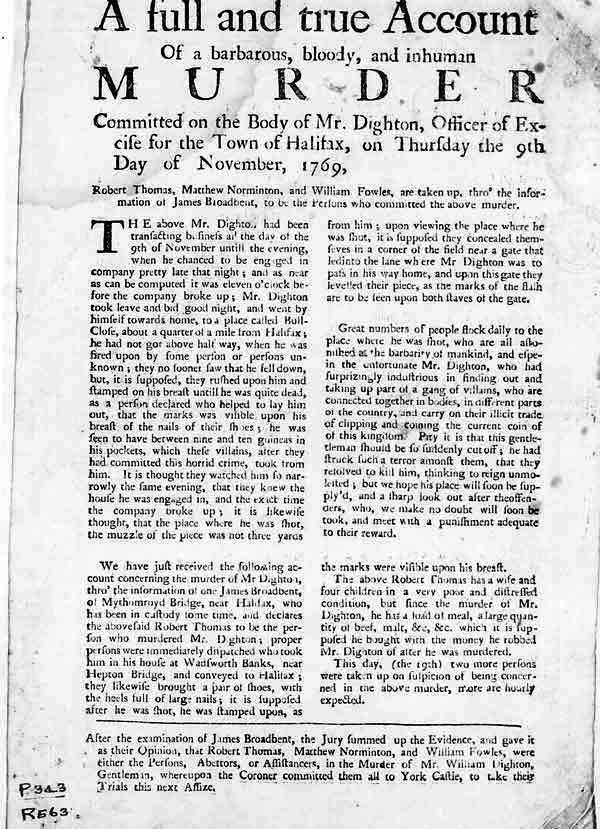 Punishment for the crime

David Hartley - 'King David' - was hanged at Tyburn, near York, on 28 April 28 1770. His body was buried in an old graveyard at Heptonstall above Hebden Bridge. It took the authorities some time to catch the others.

Robert Thomas was acquitted of the murder of William Deighton but finally hanged as a highwayman on 6 August 1774, his body being displayed on Beacon Hill, Halifax, as a grim warning.

Matthew Normanton fled when the Sheriff's men came for him and hid out in the valley, but he was finally caught and hanged on 15 April 1775. Isaac Hartley, the man who organised the murder plot, was never brought to trial due to lack of evidence. He died an old man of 78 at Mytholmroyd in 1815, one of the few principals among the Cragg Vale Coiners to escape the hand of justice.

To turn Kings Evidence - to give information to the court in order to reduce your own punishment when you have been charged with a crime - used when Britain is ruled by a king.