The East Riding Yeomanry in the First World War

The Volunteer Cavalry Regiments of the Humber

The East Riding Yeomanry (ERY) was a cavalry regiment originally set up after the Boer War (1899-1902) to address the shortage of good quality mounted troops in the British Army. Yeomanry were volunteer cavalry units. The term ‘yeoman’ originally meant a moderately well-off independent farmer. The ERY had four squadrons, based at Hull, Beverley, York and Bridlington. 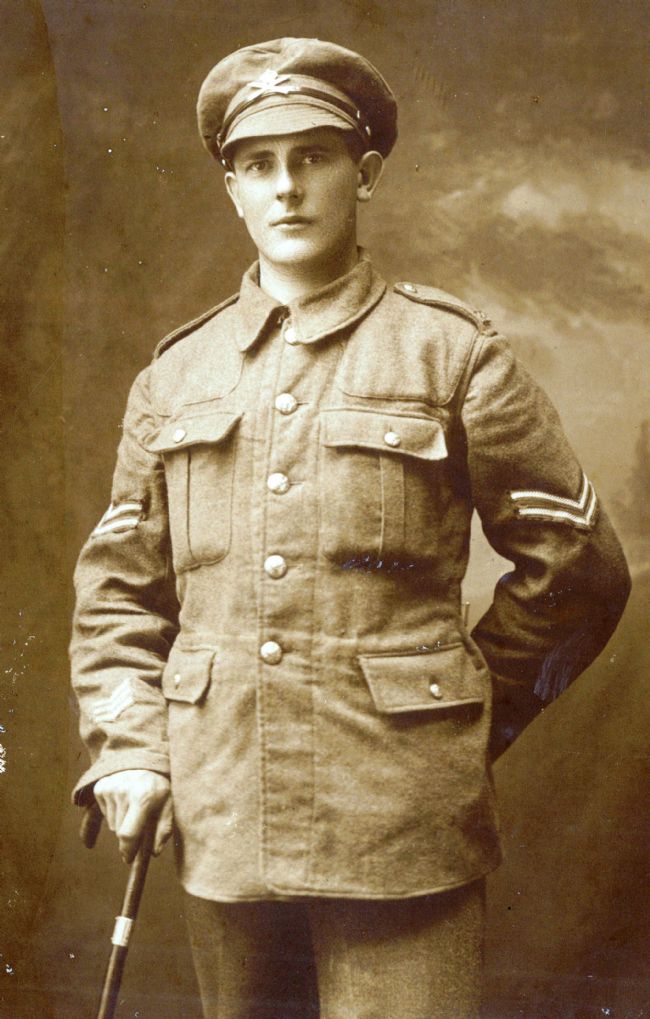 WW1 Soldier Leonard May
Withernsea farmer’s son Leonard May was one of those who volunteered to join the ERY in 1915 when he was 20 years old.

A yeomanry regiment was a natural choice for a farmer who was used to working with horses.

After his initial training in Hull and Beverley, Leonard spent time at Seaham Hall in County Durham, before being posted to Egypt not long after he had enlisted, in October 1915, and Palestine in 1917.
Watch this short film about Leonard May’s wartime service:
War Stories: Leonard May of the East Riding Yeomanry 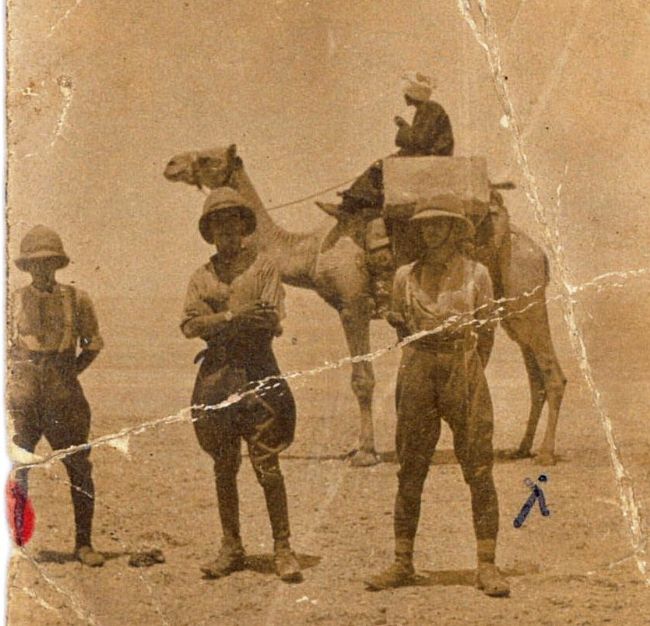 East Riding Yeomanry in the Desert
In 1914 Egypt was a British protectorate. The lands that form the modern Middle East were part of the Turkish Ottoman Empire, which was then the world’s greatest independent Islamic power. The Ottoman Empire joined the conflict in November 1914 when the Sultan declared a military jihad (holy war) against France, Russia and Great Britain. Ottoman rulers were impressed with German military and industrial powers and saw involvement in the war as a chance to regain lost territories and expand their empire. In February 1915 the Central Powers attacked the Suez Canal. 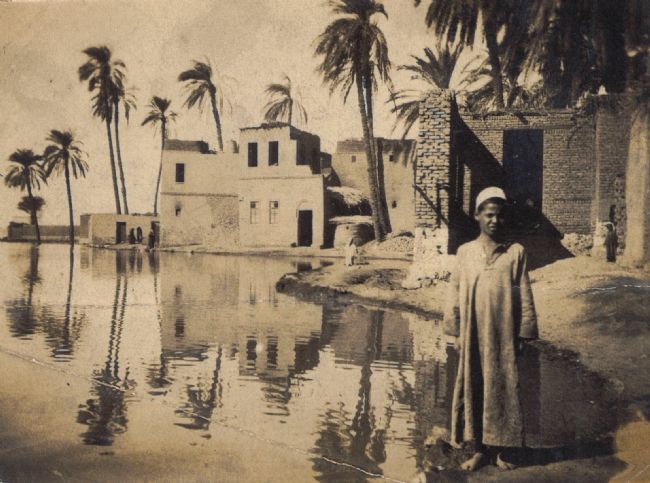 Suez Canal in WW1
The Suez Canal in Egypt connects the Mediterranean Sea with the Red Sea and enables ships to travel between Europe and East Asia without having to navigate around Africa. It was a vital supply route for the British Empire. Some people at the time believed that success in Palestine would be a better way to defeat Germany than the stalemate on the Western Front. The ERY was stationed with the British Army in Egypt and Palestine with the task of defending the Suez Canal from Ottoman troops and later of advancing against the Turks.
By 1917 the defence of Egypt had evolved into an invasion of Palestine, which was held by Ottoman troops. Gaza was seen as the gateway to Palestine. There were three battles at Gaza during 1917 and Leonard was involved in all of them.

At El Mughar in November 1917 the East Riding Yeomanry was involved in one of the last cavalry charges of the British Army. 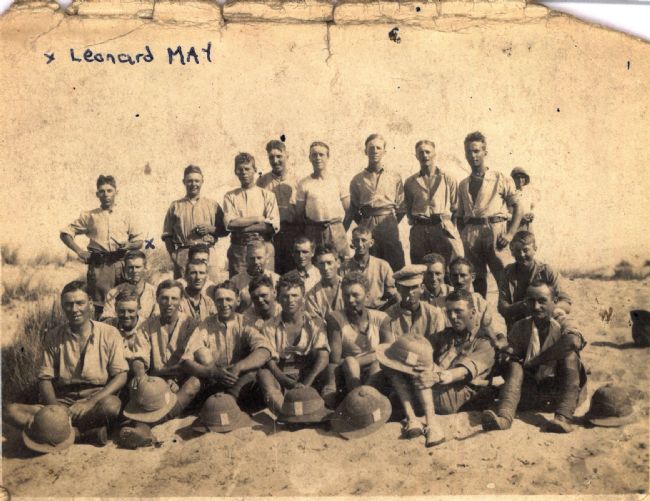 Postcard of East Riding Yeomanry
May then saw action on the Western Front before being discharged from the army in January 1919. After the war he returned to farming at Brantingham Grange and Brook Farm, North Cave.  He died in December 1971.
Leonard’s family kept many of the letters and postcards he sent home while on active service. In later life he wrote a memoir about his experiences. 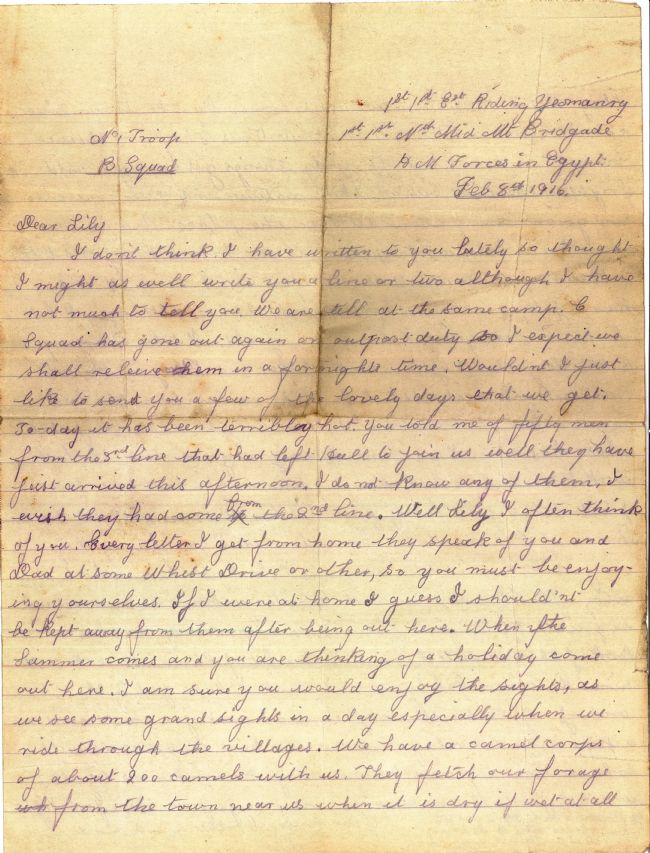 Enlisted - signed up for military service.
Memoir - an autobiography; someones personal experiences.
Protectorate - a relationship of protection and control by a superior power over a dependent country or region.
Stalemate - deadlock; situation where further action is blocked.
Next section