This session plan covers the following aims and outcomes: 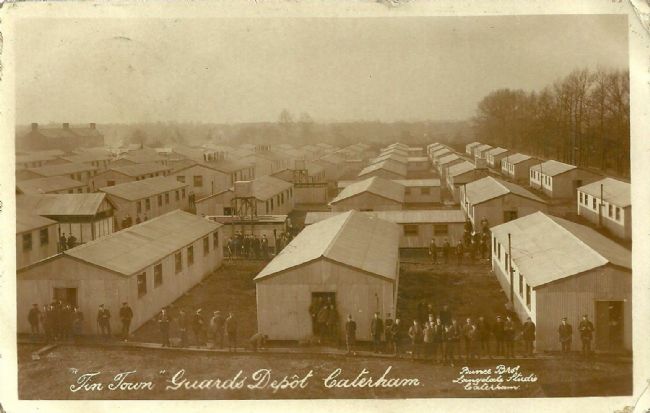 Before undertaking this session, you will need to prepare some blank template maps for your local area. These should provide a framework for your chosen area of study. We recommend that you select an area of no more than 5 kilometres square for your local study. This could be a village or town, a rural area, or an area within a large city.

The template that you create does not need to be to scale but it should show in sketch format the key features of your chosen area, for example, one or two roads and notable landmarks such as rivers, the coastline or woodlands. It is important to ensure that any features you include were both visible during the First World War and still in existence now.

If possible, it is useful find an Ordnance Survey map from the interwar years, so you spot can any changes potentially made during the First World War and before the Second World War.

There are a number of different approaches to sourcing historic photographs of your chosen study area. Local libraries, museums and archives may hold physical prints of images that you can search. A trip to a local archive or library with your class or group would make a fantastic addition to your research!

The series of animations produced for the BBC Primary History website are a useful resource for helping your pupils or group to think about life on the Home Front during the First World War. The animations in the ‘My Town’ and ‘My Family’ sections are particularly relevant to this Session.

The First World War was the first “total” war, meaning that civilians, men, women and children across the country were involved in the War Effort in some way.

Some people were directly affected by the bombing of their local area, by Zeppelin airships or Gotha bombers and by coastal bombardment from battleships and submarines. Many women were involved in working in factories and on the land for the first time; and children played their part too. Whether you are studying an industrial, urban or rural landscape you will find a First World War story from the Home Front.

Begin the session by recapping about what you discovered during Session 1: How were people at home involved in the First World War?

This session will focus much more tightly on your own local area. Discuss with your group the area that you have chosen to focus on. Talk about what the area is like now. You might like to ask these questions:

Provide each pupil or group member with two copies of the template sketch map that you have prepared. Using the historic maps (either online or paper copies) can they draw onto the template the buildings and features that would have been in the area during the First World War? Using their knowledge of the area along with modern maps, can they complete the second template map to the area as it is now?

Writing challenge… can your pupils or group members describe the differences between their two maps?

Using historic photographs alongside modern images or their own photographs and observations, can your pupils of group describe how the same building looked during the First World War and now?

The area of Redmires, near Sheffield, was used extensively during the First World War. During the War, the Redmires Training Camp was established to train the men of the Sheffield Pals Battalion and other regiments; the men used the surrounding landscape to dig practice trenches and train for deployment on the Western Front. An airfield was established in the area and the Training Camp was eventually transformed into a Prisoner of War camp towards the end of the war.

• A simple Google search brought up a record for the site of the Redmires Training Camp on the Historic England website. This provided some background information for the site as well as a general location.

• The National Library of Scotland’s map website provided a 6-inch Ordnance Survey map from 1924. This was discovered using the ‘Find by place’ function, with the ‘Great Britain, Ordnance Survey’ category and ‘OS Six-inch, 1842-1952’ map selected. This map revealed the location of the Redmires Training Camp at Lodge Moor, Sheffield; it was the Sheffield Pals training camp and was later used as a Prisoner of War camp.

• Modern aerial photographs, such as Google Maps and Bing Maps, can be very useful for finding, or confirming the presence of, First World War remains and earthworks. While investigating the Redmires area with the Google Maps mapping layer two potential practice trenches were discovered in an area used by the Sheffield Pals. You can also use Google Maps and Bing Maps via the Home Front Legacy recording app (see Session 4: Accessing and using the Home Front Legacy recording app)

• The local archive service hosts an on-line ‘Picture Sheffield’ photographic catalogue. Searching this website provided a number of historic photographs showing the Redmires Training Camp showing what life was like in the camp during the War.

At the end of this session, your pupils or group members should be able to answer these questions: What was our area like 100 years ago, at the time of the First World War? How is it different today?