Is it worthy of being in a museum, and who owns museum objects anyway?
View resources Teachers notes Share View related stories
Add to board
Previous section
The Shabti's Story

Watch the dramatisation of Amelia and Aquila's story below or download the text of all story summaries as a Word doc.

Background: Amelia and Aquila both have an avid interest in ancient Egypt. But they don’t agree about what Amelia should be talking about and showing during her lecture to the Leeds Philosophical and Literary Society.

It is the late 1880’s in Leeds, and Reverend Aquila Dodgson; Minister, keen Egyptologist and Secretary of the Leeds Literary and Philosophical Society; walks through the streets on his way to the Philosophical Hall and Museum.  En-route he pauses to admire the city’s municipal buildings, reflecting on how Leeds can be proud of its reputation as a city of learning and culture.

He arrives at the Hall and in the entrance spots a lady’s hat, cape and umbrella hanging on the coat stand…his guest, Miss Amelia Edwards, has arrived!

In a side room, Miss Edwards is addressing an envelope to Reverend Dodgson.  She packs a notebook containing lecture notes for the address she is about to give to the members of the Society into her bag, along with a wrapped object.  She checks her appearance in a mirror and then with note in hand, leaves the room.

In another side room Aquila is retying his cravat, when the note is slid under his door.  Humming, he goes to retrieve it, slices it open with a letter knife and reads…he stops humming, his face falls.  Hurrying now, he leaves the room.

Aquila and Amelia meet on the stairs and greet one another warmly; the Reverend welcomes Miss Edwards to the Hall and asks about her journey from Bristol, she in return thanks him for all the arrangements that have been put in place for her.  She starts down the stairs as if to proceed to the planned reception with the Society’s members before the lecture, but is stalled by Aquila.  He raises with her the subject of her imminent lecture, sharing that he was of the opinion that she was going to talk about the scientific work of the Society, particularly the investigations carried out on the mummy Nesyamun; work that was  considered critical in raising the profile of Leeds.  However, on reading her note, he discovers that there has been a change of plan.  Amelia reminds him that the work he speaks of was carried out over 60 years ago and that the reputation of Leeds is now truly established.  Aquila in turn, reminds her that they had already agreed upon the content of her lecture, and that members of the Society and the press are expecting her to talk on these aforementioned achievements.  Moreover he adds, he is surprised to find that she intends to speak about small, domestic artefacts from his own private collection instead. She reassures him that she will speak only about those artefacts that she has gifted to him, so that there can be no accusation of self-promotion on his part, and that these items are significant in that they demonstrate the vital work of the Egyptian Exploration Fund.  Amelia manages to steer past Aquila and continue on towards the lecture hall.

As they walk, Aquila continues to enquire about the items Amelia has selected to focus on in her lecture and is surprised when she tells him that it will be a shabti from the tomb of Pharaoh Seti 1st.  He protests that such figures are common and adorn the homes of many tourists who have travelled to Egypt. 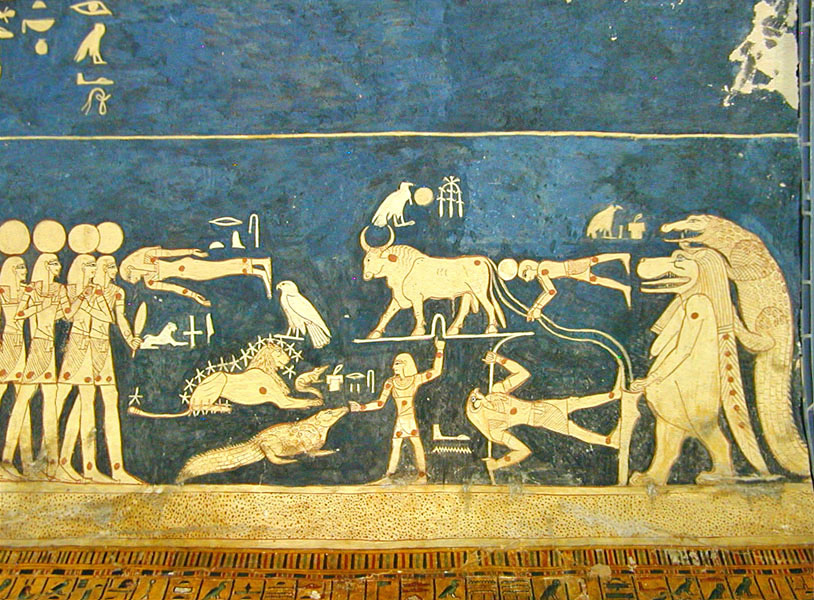 Ceiling in the Tomb of Seti I

They arrive at the doors of the lecture hall where the members of the Society are waiting inside, Aquila moves to block Amelia’s entrance.  He asks again why Amelia wants to talk about the shabti, and is shocked when she unwraps the object from her bag and reveals it to be the shabti, taken from his own personal collection.  Amelia tells him that this small figure tells a story of tombs stripped of their gold by graverobbers, the plundering of ancient sites by so-called European adventurers and street traders selling artefacts as tourist trinkets with no care for their value or origins.  She tells Aquila that the Egypt Exploration Fund will promote the cause of preservation and learning, protecting objects, such as the shabti, for future generations.  She appeals to him to support the fund, and to encourage the members to also donate.  She suggests that as a supporter, he may be able to join an expedition to Egypt to join archaeologist Flinders Petrie at the site of the Temple of Amarna.

Won over by this suggestion, Aquila opens the door and he and Amelia enter the lecture hall together.

Preservation – keeping something that is considered important, free from damage or decay

Scholarship – learning at a high level

Lecture – an educational talk to an audience

Excavation – digging, especially to remove something from the earth

Mantleshelf – a shelf above a fireplace, often used to display things in the home

Racketeer – a person who takes part in dishonest business

Archaeologist – a person who studies things that people made, used and left behind to understand what people of the past were like and how they lived