"Dad was reading the paper this morning and saw that our neighbour had got himself into trouble for fighting. One of the dogs that lives on Swan's Yard has to be put down for biting people too. There were quite a few robberies as well. Mam got worried about Dad working in the area where these were happening, but Dad said that people have always done 'bad' things - we just hear about them more now. I wonder if he's right?"

Did people do 'bad' things in Victorian times?

Sticks and stones might break my bones, but names will never hurt me...

Look at the article above which mentions a girl of 14 hitting and calling another 'girl' names, but do you notice anything strange about the other girl's age?

Would you expect to see an event like this dealt with in court?

What would happen today?

The Victorians believed strongly that it was a father's and husband's duty to look after their families.

Who do you think would have to pay to look after families if the fathers did not? Do you think this worked?

Look at the second report on 'caution to dog owners': 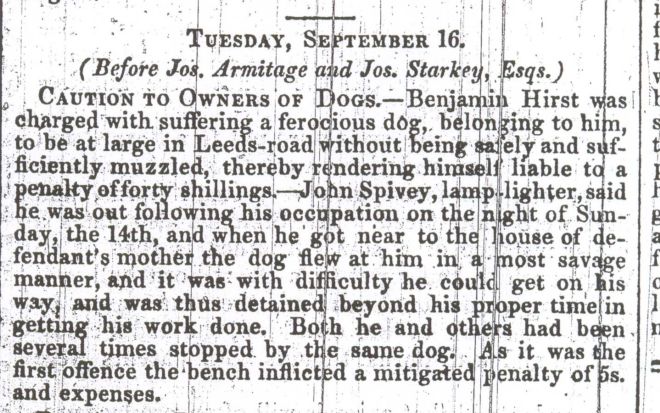 This shows that dangerous dogs are not a new thing. Today there is a law called the Dangerous Dogs Act which is designed to keep people and other animals safe from dogs by muzzling them. As you can seen from this news report, they had the same problems in Victorian Huddersfield.