Thwaite Mill continued to function throughout the Second World War, still under the management of the Horns. In fact, it played a crucial role in supporting the British Home Front.

Considering its situation, it was lucky that the mill was never bombed. With the absence of all artificial light during Blackouts, rivers and waterways made useful navigational tools for German pilots searching for bombing targets from above.

Factories were often their preferred choice due to the disruption bombs would cause to manufacture of war supplies and essential goods.

Consequently, as a site of industry surrounded by the River Aire and the Aire and Calder Navigation, Thwaite Mill was at high risk of experiencing a raid by the Luftwaffe. That this risk never materialised is therefore rather fortunate.

A bomb hitting Thwaite Mill would not have hindered the production of military goods, for it was never an armaments factory. However, it did produce a valuable commodity for repairing bomb-damaged buildings: putty, produced at the mill since 1923. This substance was to play an important role during the Blitz. 43,500 people were killed during these nine months of intense bombing and many thousands of buildings were destroyed or faced substantial damage, including the shattering or cracking of windows.

Indeed, demand from London was such that, even with the mill operating on a shift system so that production occurred 24 hours a day, 7 days a week, the Horns struggled to keep up. In an unexpected sense then, it can be argued that the war was beneficial for Thwaite Mill.

For the people living and working on the mill island, daily life altered in line with changes across Leeds and the rest of the country. Safety precautions such as evacuating children, carrying gas masks, ensuring ‘blackout’ at night and creating air raid shelters would have been followed. Rather than an external Anderson shelter, the cellar in Thwaite House was used for protection against bombs.

Rationing reduced the amount and variety of food eaten, but the large amount of land available on the island meant that growing lots of fruit and vegetables was possible.

Residents at Dandy Row had their gardens and allotments to provide a steady supply of home-grown produce and rear hens and pigs, and so were able to independently source much of their own food. The unusual rural setting of the mill within its wider urban landscape meant that those living on the island experienced some advantages usually only afforded to countryside dwellers. 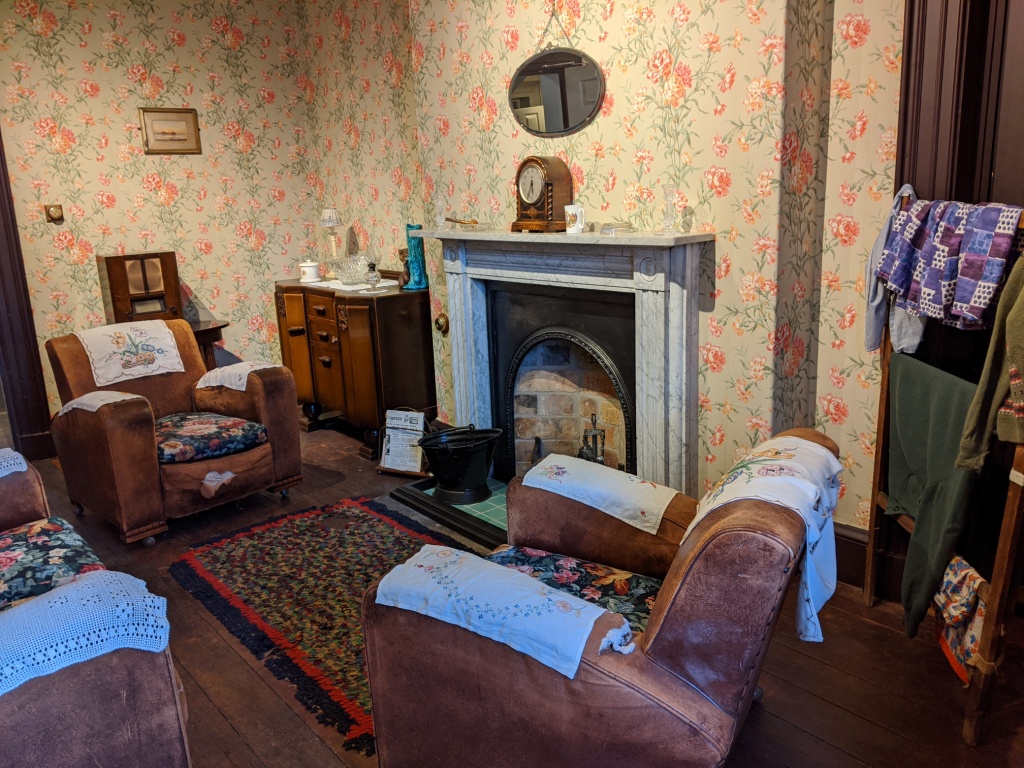 Blackout - a safety measure introduced during the war to stop enemy aircraft from identifying bombing targets. All lights were turned off or concealed at night.

Blitz - the sustained aerial attack by the Luftwaffe on major cities in the UK from September 1940 to May 1941. It marked a change in military tactic by the Germans following their defeat in the Battle of Britain. Unable to claim dominance of the skies, their plans to invade Britain were put on hold and they instead decided to destroy London and other cities in an attempt to subdue the British through demoralisation.

Rationing - a system which ensured the fair distribution of limited food supplies by setting small weekly allowances for each person, enforced nationally from January 1940. Before the war 70% of Britain’s resources came from abroad, but this was vastly reduced during the conflict due to German blockades of British ports and the sinking of British ships bringing imports. Wherever possible, people were encouraged to produce their own food.