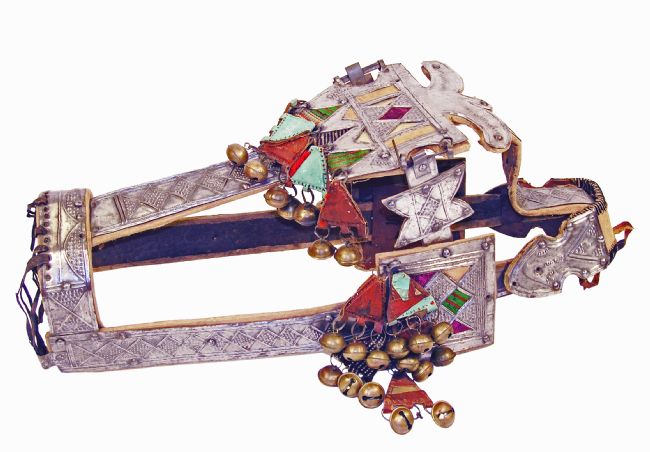 This horse’s headdress would once have been part of a set of parade or show armour rather than being used for protection in battle. The headpiece is called a Kwalkwali. It probably comes from Northern Nigeria, and is typical of the decorative style of the Hausa and Fulani peoples who live in that region of West Africa.

This type of highly decorated equipment would have belonged to somebody important: a tribal chief, or elite warrior, whose job it was to act as the cavalry guard. It was his job to act as a bodyguard on horseback for the local leader, the Emir. 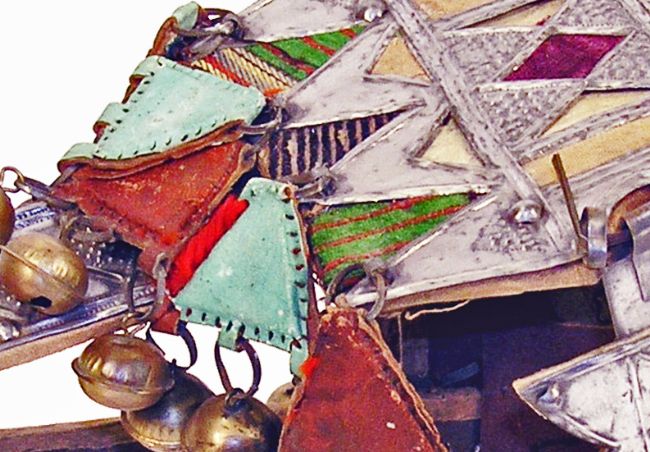 Detail of an African Horse Headdress or Kwalkwali
The head cover has a leather backing to protect the head, covered by a tin headpiece. This is patterned with diamond shapes, decorated with inlaid fabric strips, and hung with leather tassels, with bells attached.
This object is interesting because it is an example of African and Arabic culture coming together. It shows the influence of the Arabic world in this part of Africa, which has been the case since Islam arrived over ten centuries ago.

Cavalry - Horses and riders used for military purposes
Elite - people of the highest class or rank in society (This headdress is used to show that the rider is of high rank in the army.)
Emir - a person of high office in the Muslim world, like a prince

The ornamentation and beads clash slightly with the metal used. Was this used purely to impress as ornamentation, or would it also protect the horse’s face in battle? - Tom Burke