Oliver Cromwell was not a major figure at the beginning of the Civil War in England in 1642 but rapidly rose in importance. He raised his own troop of cavalry in the summer of 1642. He became a colonel by early 1643 and rose to Lieutenant-General in autumn of the same year, becoming the second in command of Parliament’s forces in the east of England. He was a nationally known figure by mid-1645. His success is remarkable, given that he only became a soldier at the age of 43 and he did not have any real military experience to begin with.

Oliver was unusual in that he chose his men for their religious faith rather than their position in society. He was good with people and horses, which helped him succeed as a cavalry officer. He went on to train effective soldiers, looking after their welfare, ensuring strict discipline on and off the battlefield, and leading by example with great personal courage.

He was deeply unimpressed by the quality of Parliament’s cavalry at the start of the war, writing to fellow Parliamentarian John Hampden:

'Your troopers are most of them old decayed servingmen and tapsters; and their troopers are gentlemen's sons, younger sons and persons of quality; do you think that the spirits of such base and mean fellows will ever be able to encounter gentlemen that have honour and courage and resolution in them?'

Cromwell played a key role in the July 1644 Battle of Marston Moor, the largest and bloodiest battle of the war, which helped secure the north for the Parliamentarians. He took part in several more battles in the midlands and the south east.

The Museum has two swords that belonged to Cromwell in our collection, one of which is shown here.

The initials O.C. are carved into the blade, which was made of German steel in the late 1640s. German steel was considered to be the best available in Europe at the time. The basket hilt is decorated with figures inspired by ancient Greek stories, framing an oval surrounding a human head with contemporary beard and hair styles. 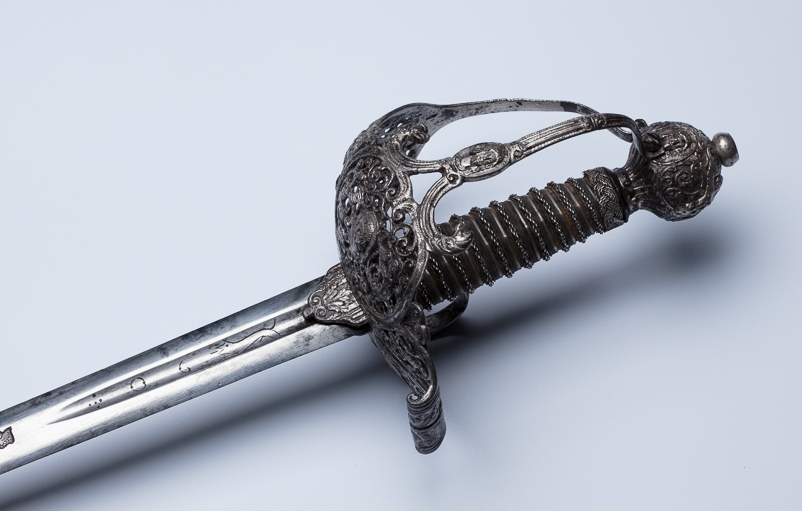 This decoration was considered fashionable at the time. There are small indentations in the blade, which suggests Cromwell actually used it in battle.

By 1644, Cromwell had grown frustrated at the overall stalemate in the war and the perception that many of the Parliamentarians commanders were incompetent. He was one of the driving forces behind the ‘Self Denying Ordinance’ passed on April 1645, which forced all members of the House of Commons and the House of Lords to resign from their positions in the army (although a number of more competent officers, including Cromwell, were then offered new placements). The Ordinance paved the way for the establishment of the New Modelled Army – the first standing army in Britain.

Cromwell had little involvement with the raising and training of Parliament’s New Modelled Army, which was done by its commander Sir Thomas Fairfax. Cromwell was second in command, as Lieutenant General of Horse. In June 1645, he played a major role at the decisive Battle of Naseby. Cromwell went on to lead troops to victory in many of the remaining battles and sieges throughout the First Civil War, which ended when King Charles surrendered in May 1646.

Second Civil War: Trial and Execution of Charles I

Due to his impressive military successes, Cromwell became one of the most powerful figures in Parliament. He played a decisive role in the trial and execution of Charles I and the abolition of the monarchy. Cromwell was not against the monarchy as a whole and pushed for a settlement with the King after the First Civil War. He proposed that Charles should be restored to power if he compromised with Parliament. However, after the King’s escape in the winter of 1647 Cromwell felt betrayed and began to support the view that the King should be put on trial and removed from power.

Debate continued over the matter of the King until the end. Even as late as December 1649 Cromwell seems to have still had mixed feelings on the matter, on one occasion telling a colleague that they would “cut off the King’s head with the crown upon it”, on another telling the Army Council that they should still accept a deal if the king agreed to one.

The trial was held at Westminster Hall in January 1649 and lasted one week. Charles was found guilty of being a ‘Tyrant, Traitor, Murderer, and Public Enemy’ and sentenced to death.

His execution took place on 30 January 1649. Afterwards, Cromwell is famously thought to have commented that the king’s death was a “cruel necessity”.

There had been fighting in Ireland since a Catholic uprising against Protestant settlers in 1641. In 1649, the Catholic rebels allied themselves with English and Anglo-Irish Royalists. In reaction, Parliament ordered Cromwell to both suppress this potential threat to the Commonwealth and seize more than a third of the land in Ireland to cover the costs of the war against the rebels.

Cromwell arrived in Ireland in August 1649 and spent nine months there. He first laid siege to the town of Drogheda. After several days of bombardment by cannon, and a refusal to surrender, the town was stormed on 11 September 1649. As many as 3500 defenders were killed, including many Catholic priests and a much-disputed number of civilians. The town of Wexford similarly refused to surrender during a 9 day siege in October 1649. 2000 Royalist soldiers were killed or fled in the subsequent fighting and hundreds of civilians died trying to flee, many of them drowning in the river. Cromwell went on to take 28 other towns and garrisons in Ireland, many of which surrendered, fearing the same fate as Drogheda and Wexford.

Cromwell’s actions in Ireland continue to cause controversy. Some point out that under the standards of the time, any town that refused to surrender could expect no mercy. Cromwell would have wanted to make an example of Drogheda and Wexford to persuade other towns to surrender and to avoid further bloodshed. Many others condemn Cromwell as a murderer and war criminal. His actions in Ireland left a permanent stain on his reputation, making his name one of the most hated in Irish history. 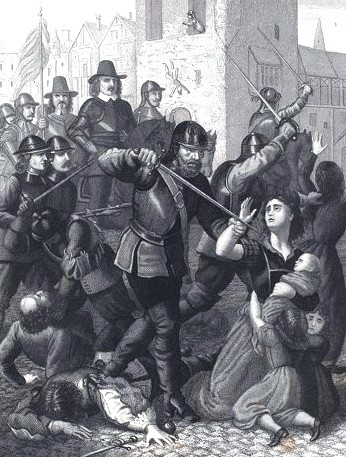 The Siege of Drogheda

Cromwell was recalled from Ireland to campaign against Scottish Royalists in May 1650. The Scots had proclaimed Prince Charles, the son of Charles I, to be king. Cromwell appealed to them to reverse their decision, and when this was rejected, he led an army into Scotland. He defeated the Scots at the Battle of Dunbar on 3 September 1650. The remaining Scots and Royalist forces headed south into England in 1651, pursued by Cromwell and his own forces. Cromwell met them in battle at Worcester on 3 September 1651 where the Royalists were heavily defeated. The Civil Wars had been brought to an end.

Cavalry: soldiers who fight on horseback. During the Civil Wars they were
armed with a pistol and a sword.

Parliamentarian: a soldier who fought for Parliament during the Civil War.

Royalist: a soldier who supported the King during the Civil War New Modelled Army (also known as the New Model Army): a standing army created by Parliament in 1645. Their first battle was the Battle of Naseby in which their victory served as a turning point in the war.