The society needed a sympathetic advocate to represent the cause. They found the ideal candidate in William Wilberforce, who became their spokesperson. Wilberforce had strong political backing from his friend the Prime Minister, William Pitt, who set up a Privy Council Committee to investigate the slave trade, and asked Wilberforce to lead the Abolition campaign in parliament. 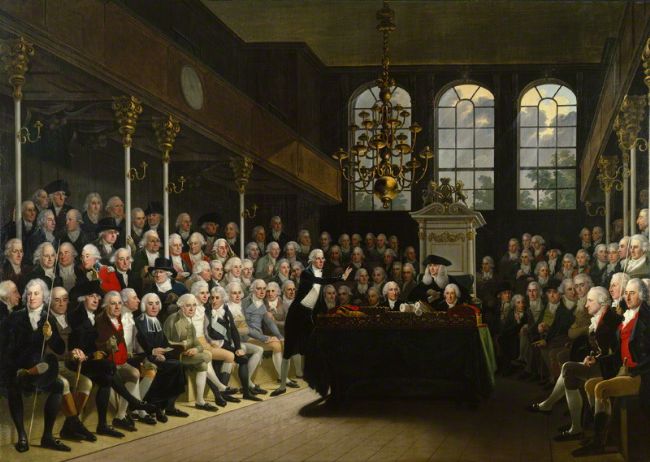 The aim of the Abolition Society was to abolish British involvement in the slave trade, rather than attempt to end slavery altogether. They did this by raising awareness of the barbaric practices involved in the trade. 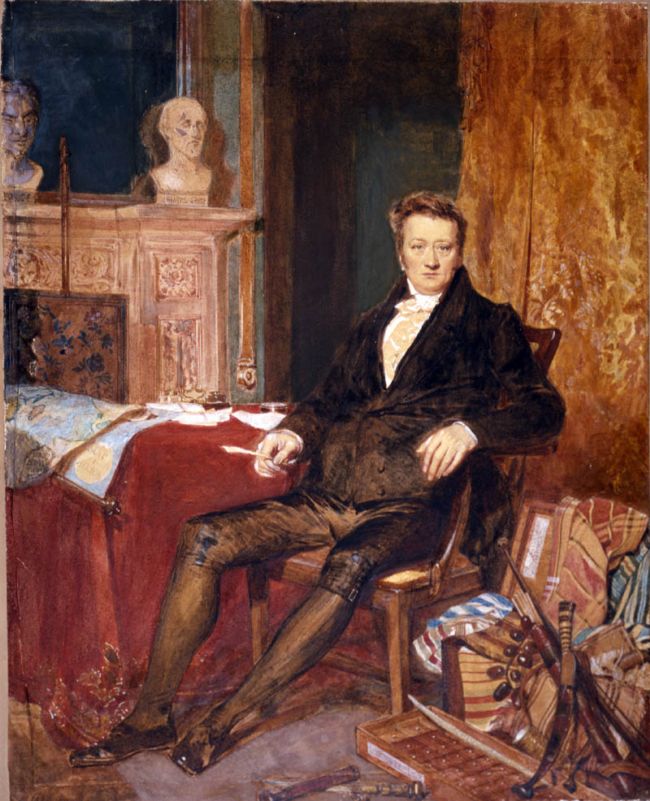 Thomas Clarkson, the founder of the Abolition Society, began the fight by collecting as much evidence against slavery as possible. He visited the Liverpool and Bristol docks and took statements from the crew members of slave ships. Clarkson also collected equipment used on board, including metal hand and leg shackles and branding irons. He also took measurements of the ship's holds where as many as 700 captured people were kept chained together, often so tightly that they were unable to turn around during the six to eight week journey.

Painting 'A Word Picture' of Slavery

Clarkson published his findings in a booklet entitled A Summary View of the Slave Trade and of the Probable Consequences of Its Abolition, in 1787. He travelled the country giving out anti-slavery leaflets describing the horrific conditions endured by enslaved people on board slave ships. He also took with him a box of African goods such as wood, spices and cloth. He argued that Britain could still make a profit by trading in goods rather than enslaved people .

Largely down to the wealth of evidence and knowledge supplied by Clarkson, Wilberforce was so well informed on the subject of slavery that he was able to give his three-hour Abolition Bill speech to members of the House of Commons in 1789. Wilberforce used his speech to 'paint a word picture' of the horrors of the slave trade and in particular of the Middle Passage. He made sure not to directly attack his political opponents who were in favour of keeping the slave trade, but appealed to their consciences instead.

Following Wilberforce's speech, The House of Commons was undecided and adjourned the debate. During this time war broke out with France, and the French Revolution took place. Political attention was diverted away from the abolition of the slave trade, but Wilberforce and the abolitionists didn't give up their cause. They simply carried on gathering evidence and campaigning.

One of the most successful campaigns carried out by the Abolition Movement was the Sugar Boycott. In 1791 the society distributed leaflets encouraging the public not to buy sugar produced in the West Indies on plantations that used the labour of enslaved people. The leaflets were mainly aimed at women, as they most often controlled the purchases made for the home. As a result about 300,000 people boycotted sugar and sales began to drop.

In an effort to increase sales, some shops stocked only sugar imported from India, which had not been produced on plantations that used enslaved people. They advertised it as 'free-labour sugar' (sugar produced by workers who were 'free' as opposed to enslaved). Many British women supported the sugar boycott. At that time they did not have the vote, but by taking economic action against slavery, their voices could be heard. To promote the abolitionist cause, many household objects, such as sugar bowls and milk jugs were produced, carrying sympathetic slogans and images of enslaved people. The campaigners also persuaded thousands of people to sign petitions calling for the end to the slave trade.

So many members of the public gave their support to the campaign that politicians and businesspeople could no longer ignore the will of the people. Producers and importers of goods grown in the West Indies started to see the economic benefits of slavery dwindle.

Finally, in 1807, the Abolitionists achieved their first major political success with the passing of the Abolition of the Slave Trade Act.  Although it was an important milestone, the act only made the trading of enslaved people an illegal activity, rather than making slavery itself illegal. 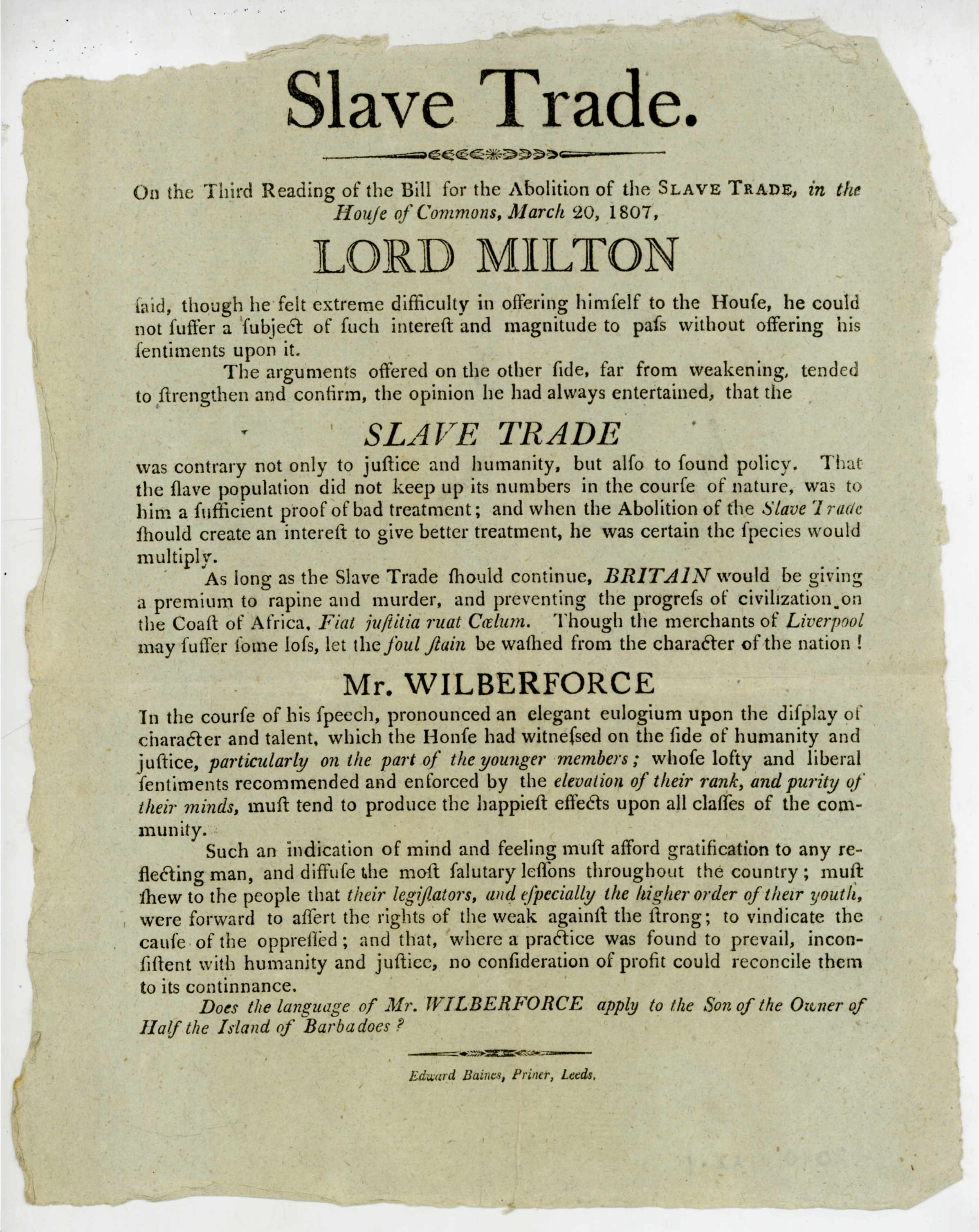 It wasn't until August 1, 1833, after much campaigning and protest by enslaved and formerly enslaved Africans and White abolitionists, that full legal freedom was granted to all enslaved people, and the Anti-Slavery Society was disbanded.

Abolition - ending something officially, making a law against it

Adjourned - a temporary break in a meeting or court case

Advocate - someone who speaks for another person, like a lawyer

Dwindle - when something slowly decreases or comes to an end

Importer - someone who brings overseas goods into the country

Opponents - people who fight or compete against you

Statement - a description of facts or an account of something