"I must speak of the transit of the slaves in the West Indies. This I confess, in my own opinion, is the most wretched part of the whole subject. So much misery condensed in so little room, is more than the human imagination had ever before conceived."

William Wilberforce, speaking before the House of Commons in 1789.

The middle passage Wilberforce speaks of in this extract from his 1789 speech was one element of the trade route known as the 'Triangular Trade' (now called the 'transatlantic slave trade), connecting Europe, Africa and the Americas.

Slavery had been practised by many peoples and cultures for thousands of years by the eighteenth Century, but the Transatlantic Slave Trade was dramatically different in nature and scale to anything that had existed before. Great wealth was generated by this trade, which was operated within a brutally efficient system. 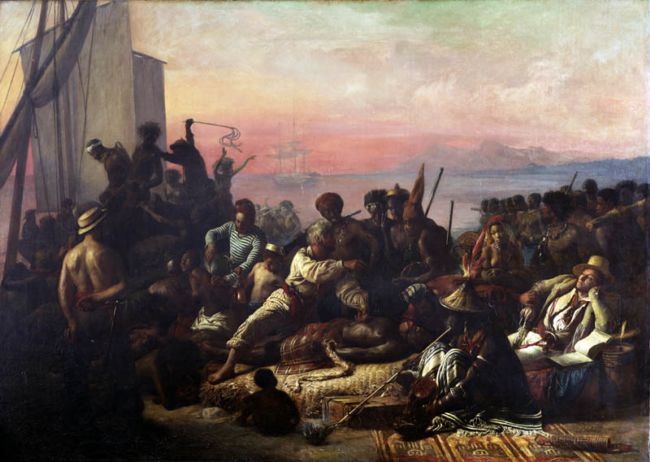 The transatlantic trade developed out of the growth of European colonies in the Americas, which had initially relied on the labour of Indigenous People. The success of crops such as tobacco and sugar created a huge need for labour. The physical, psychological, social, cultural and economic damage caused to African and Caribbean societies by the transatlantic slave trade makes it one of the greatest crimes against humanity.

The Outward Passage – Europe to Africa

Numerous goods produced in Britain were rare and valuable in Africa, including guns, ammunition, alcohol and manufactured cloth. These formed the cargo of the ships known as 'slavers' sailing from Europe to America. The economies of many British cities and trading ports depended on the slave trade. Bristol’s industry grew due to the high demand for brass pans and kettles; Birmingham profited from selling guns, and outfitting slavers with chains and padlocks. Overseas goods such as silk and cowrie shells were also imported to Britain and then exported to Africa.

The Middle Passage – Africa to the Americas

Goods from Britain and Europe were exchanged with the enslavers for African men, women and children. The White, European traders were also interested in goods such as gold, ivory and spices. 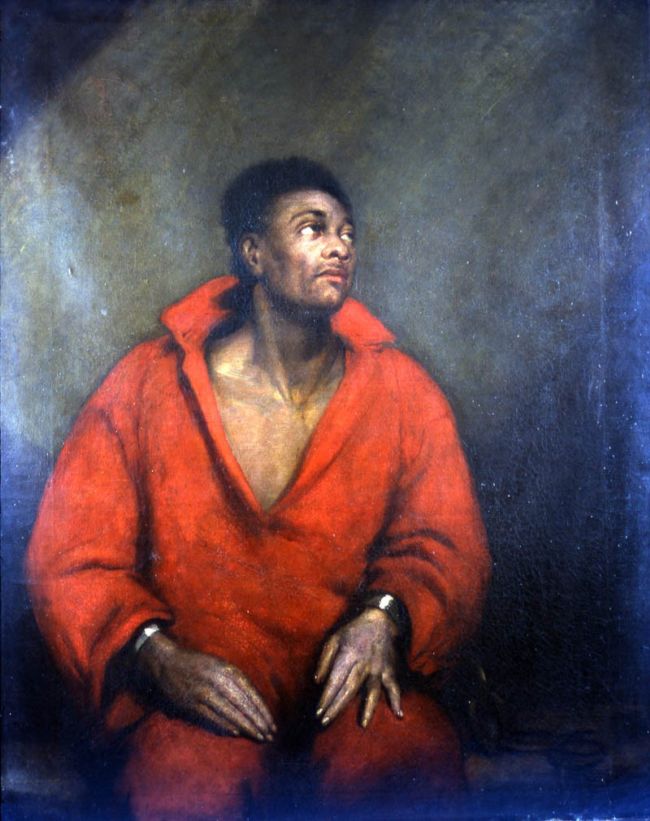 'The Captive Slave' by John Simpson 1825
The middle passage itself, the journey from Africa to the Americas, took around three months. The conditions on board for the captured people were horrific. They wore chains, shackles and neck collars and were densely packed in the hold of the slaver ship. Many died en route from the effects of overcrowding, such as disease. 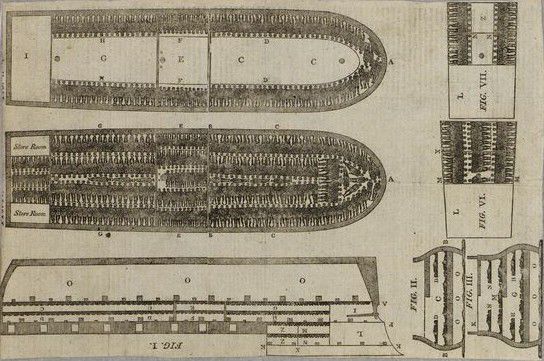 'Brookes Slave Ship' Diagram
Initially, the enslaved people were prisoners of war taken in conflicts between African states. These confilcts were fuelled by guns provided by traders from Europe. Later, up to 70% of people were simply kidnapped. It is thought that between the years 1500 and 1900, around 15 million Africans were forcibly removed from Africa. By the 1700s, Britain had become the largest trader of enslaved people, transporting about 2.8 million Africans between 1700–1800.

The Homeward Passage – The Americas to Europe

Plantations worked by enslaved people in the Americas produced crops such as sugar, tobacco and cotton which made the owners immensely rich. After delivering the captured African people, the holds of the slaver ships were filled with plantation goods and returned to Europe.

Conceived - to form an idea in your mind
Condensed - to make something denser or shorter
Cowrie shells - glossy, brightly-coloured sea shells
Efficient - completing tasks in an organised way
Forcibly - using power to try to force someone to do something
Immensely - to a great degree
Indigenous - something that comes from a particular country or region
Plantation - a large farm or estate where labourers grow crops
Shackles - metal band used to hold the wrist or ankle of a captive
Transit - to move something from one place to another
Next section