A Gift for Those who Served

In December 1914, the City of York sent a Christmas gift of a tin of chocolate to all York men serving in the forces. This was done to give soldiers a taste of home while they were spending Christmas away from family and friends. 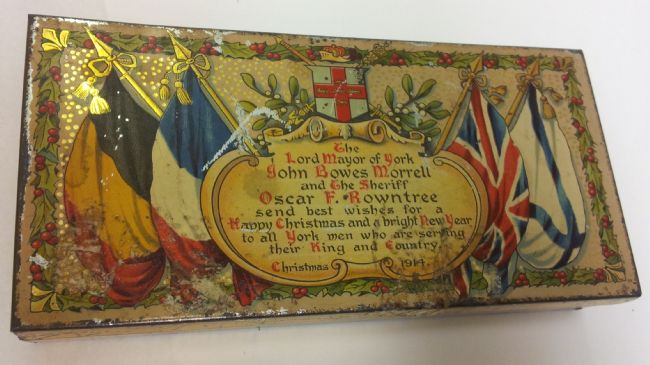 Tin of Chocolate Sent to Soldiers in WW1
Christmas 1914 was a particularly significant time during the First World War, as many people had believed that the war would be over by this point. This made the tins an important gesture to boost morale.
The scheme was organised by the Lord Mayor, John Bowes Morrell, and the Sheriff of York, Liberal politician Oscar Rowntree, a member of the family behind the Rowntree & Co chocolate factory.
Each tin contained a solid block of Rowntree's chocolate wrapped in paper. It is a pressed steel tin with a hinged lid, printed with a design incorporating the flags of the Allied nations and an inscription, which read:
The Lord Mayor of York, John Bowes Morrell and the Sheriff, Oscar F. Rowntree, send best wishes for a Happy Christmas and a bright New Year to all York men who are serving their King and Country. Christmas 1914. 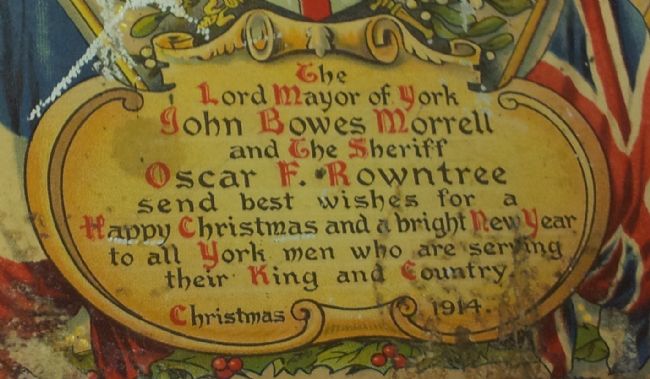 Detail of the Inscription on a WW1 Chocolate Tin
This tin, now preserved by York Museums Trust, still contains the original chocolate! Many soldiers sent their present back home so that their families could keep it as a memento. Some kept the tin for other purposes, for example one tin was used by its owner to store bullets and shell shards. 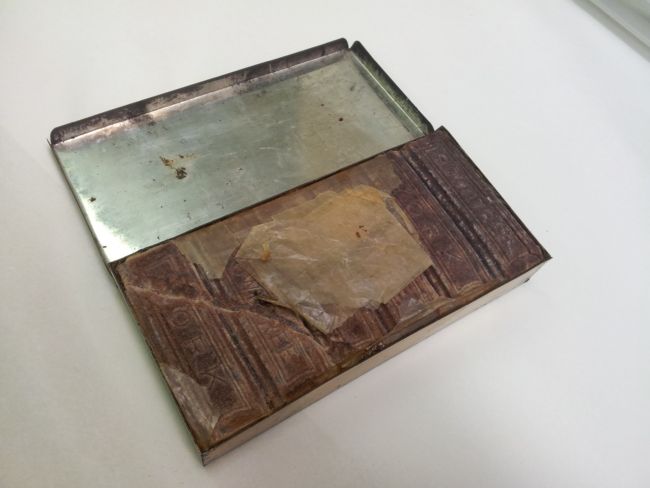 WW1 Rowntrees Chocolate Tin
This gesture, made on behalf of the city’s population, deeply touched many soldiers. It inspired a series of over 250 ‘Chocolate letters’ written by York servicemen then in training, serving in the trenches, in prisoner of war camps or at sea, who wrote to thank the organisers for the gift.

Behalf (on behalf of) – to do something acting in the name of someone else
Gesture – an action that is meant to mean something
Incorporating – joining things together
Inspire – to make someone feel or do something good
Memento - an object kept as a reminder of a person or event
Morale – feeling of well-being or confidence in a group of people
Population – group of people who live in one place or country
Preserved – kept safe
Servicemen – People serving in the armed forces
Shell – a big explosive fired from a large gun
Sheriff – (in England) someone in authority, who carries out traditional ceremonies in a county
Significant – something that is important or has a hidden meaning
Next section