Art Across the Curriculum

This picture is one of the largest Old Masters in the Ferens Art Gallery collection. Many Flemish pictures of this period are large in scale and it is likely that such breadth and colourfulness allowed them to act as a substitute for the more expensive tapestries which decorated Antwerp merchants' large houses. 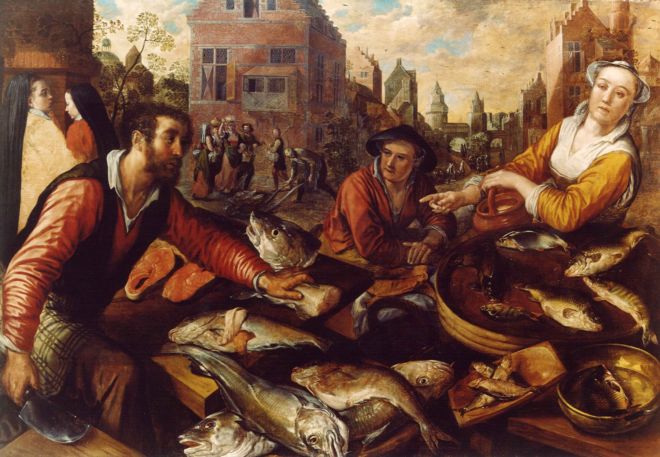 This painting is thought to be a late work by Joachim De Beuckelaer, and it is signed on the lower right, in grey paint beneath the platter of fish: 'JB'.

Beuckelaer's pictures have required a great deal of explanation, as in the artist's earlier work small figures in the background introduce some reference to a biblical theme.

This meant that at the time the pictures, although innovative in their approach, could also be enjoyed for their religious connotations.

Here, Beuckelaer creates a lifelike representation of a Flemish fish market. Such markets would often be held outside the walls of a town, as is seen here. The three main figures are all clearly involved with the market. The enigma, however, comes from the two women in the left background with their long black veils. They face each other, almost expressionless, in stark contrast to the brilliant animation of the main figures.

The dominant feature of the whole picture is the depiction of a wide variety of fish, presumably a cross section of the types of fish favoured at the time. The movements of the figures seem to echo the positions of the many fish. However, such paintings often carry specific contemporary connotations.

Take a look at the Case Study page to see how this painting could be used in an Art Across the Curriculum Project.