The Great Harry Houdini appears at City Varieties in 1902

Harry Houdini was a world-famous escapologist, which meant that he was excellent at breaking out of padlocks, handcuffs and chains. His famous tricks earned him the nickname ‘The Handcuff King’ and it was said that there was no lock or pair of handcuffs that could contain him. 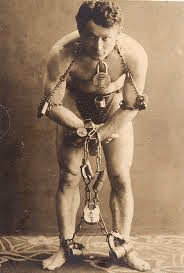 Harry Houdini performed at City Varieties Music Hall in 1902, to a packed and very excited audience. A well-known part of Houdini’s act was to challenge the audience to bring along locks, chains and other items for him to escape from. The story goes that during Houdini’s Leeds show, some workers from The Tetley brewery brought an empty beer barrel with them and challenged Houdini to escape from inside it. Houdini accepted the challenge, but ...he couldn’t escape!

And what do you think was his excuse?  Houdini claimed that the barrel hadn’t been washed out properly and the beer left inside had overpowered and confused him! 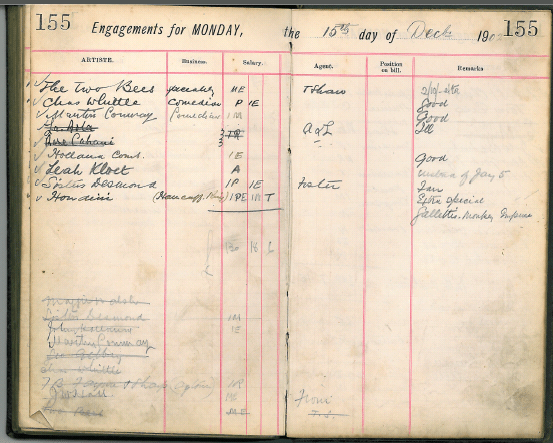 How do we know this story?

As with all stories from the past, there are some parts of Houdini’s story that we know to be true facts, with evidence to prove it, and some parts that we have heard from other people.  By piecing all these bits of information together, we can create a picture of what might have happened at City Varieties that night in 1902.

We know for a fact that Harry Houdini performed at City Varieties on 15th Dec 1902, as we have a copy of the original management book from this time. Houdini was paid a staggering £130 18s 6d for his performance, equivalent to about £7,400 in today’s money, and the manager has noted that Houdini’s performance was ‘extra special’.

However, the juicy part of the story, that Houdini got trapped inside a Tetley barrel, we only have through word of mouth. This means that the story has passed from person to person and not been written down. The Learning Team at City Varieties first heard this story from a lady on a tour, who said she had heard it from her Great Grandma who had been lucky enough to come and watch Houdini perform on that fateful night. We know that Houdini did indeed accept challenges from his audience and with the Tetley brewery being just down the road, the story could very well be true. What do you think?

Why not ask your parents or grandparents for their own stories of going to the theatre, cinema or concerts when they were younger?  Perhaps they have an exciting story about a celebrity too!