Our police force maintains peace, investigates and prevents crime and supports victims. We have regional constabularies across the country which serve our local area and national bodies oversee their work. 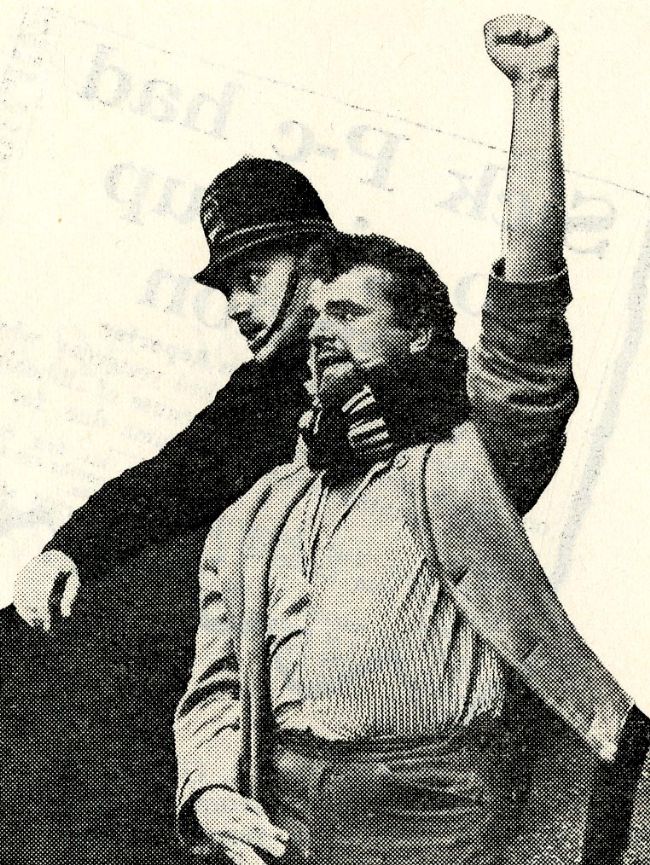 A Policeman and a Protester
An organised police force as we recognise it had its beginnings in Victorian London but the seeds were sown much earlier and the system has changed over hundreds of years.
From 1730s - local improvement acts provide provision for paid Watchmen in local authorities.
1749 - Henry Fielding (Magistrate and author) founds the Bow Street Runners in London, the first team of paid policemen.
1800 - City of Glasgow Police force is established as the first City Police force in Britain.
1829 - Sir Robert Peel establishes the Metropolitan Police in London, the first professional, centrally organised police force.
1856 - County and Borough Police Act makes policing a requirement by law, overseen by the central government.
1946 - Police Act established constabularies, local police forces which we have now.
1964 - Police Act ‘Police Areas’ established, larger areas covered by one greater police force.
The Police in Britain are chiefly concerned with keeping the peace, protecting life and property, and preventing and detecting crime but this is only by ‘public consent’. This means that the police have to keep the support of the public in order to use their powers. Public support is maintained by making sure they are open about the way the police force is run and they are held accountable for their actions.

Enforcement - making sure people obey something such as a law or a rule
Crime prevention - the attempt to reduce and deter crime and criminals
Public consent -  public approval of the existence, actions and behaviour of (in this case, the police)
Accountability -  behaving in a responsible way to the public you serve and freely giving out information about your work
Watchmen -  government or local authority chosen group of men who were tasked with law enforcement and preventing crime
Magistrate -  someone who makes decisions and judgements in minor court cases
Constabulary -  county police force consisting of police constables
Next section

Brief History of the Association of Chief Police Officers