Note: This chapter includes the use of the word ‘coloured’ when referring to Black and Brown people. This word is recognised as discriminatory and offensive. It is used here in its historical context only, to help give an accurate portrayal of the political and social climate at the time.

First World War and its Fallout

The need for manpower to help Britain’s war effort in the First World War meant that men from Britain’s Indian empire (including men from areas which are now part of Pakistan) were recruited to work in the merchant navy; on ships that were helping to supply goods necessary for the war effort.

However, once the war had ended, there was a jobs shortage in the UK, as men were discharged from war work. This led to tensions and, despite the fact that men from the colonies had answered the appeal to help with the war effort, calls were raised by White workers for them to now be repatriated.

The pressure to privilege White British workers culminated in the passing of the Special Restriction (Coloured Alien Seamen) Order in 1925. Its purpose was to exclude all Black and Brown seamen from Britain. This was initially targeted at ‘Arab’ sailors, however was shortly extended to cover all ‘coloured’ seamen including those from India.

Result of the Order

As a result of the Order, these men were expected to register as ‘aliens’. The men considered themselves British and were recognised as such, for example by local magistrates. However previous documentation they had, such as a continuous discharge book from past voyages, was not recognised.  In contrast, this documentation was still valid for White British workers. Registering as ‘aliens’ meant that the position of the men became a lot more precarious, and increased the likelihood that they would be repatriated.

Having served in the war, many of the men from British colonies were upset at the way they were being classified as ‘aliens’. They highlighted their war service as a way of protesting that they were British. Protests, led by organisations representing the men, were later supported by the India and Colonial Office, who were concerned at the repercussions back in the colonies. The result was the introduction of a Special Certificate of Nationality and Identity in May 1926  that gave men five years right to stay in the UK and ended the requirement for them to register under the Order. However, obtaining a certificate  was not easy. The first step was to contact the colony from which the men had come from to ask them to confirm the men’s identity. This could take a couple of months.

With the coming of the Second World War, there was once again a need for ‘coloured’ sailors and the 1925 Order was cancelled and the government admitted it had been wrong to issue it in the first place.

Men like Mohamed Ismail considered themselves British. Below is an example of a letter confirming the identity of Mohamed Ismail, who is referred to as a British Protected Person with a home in Mirpur. 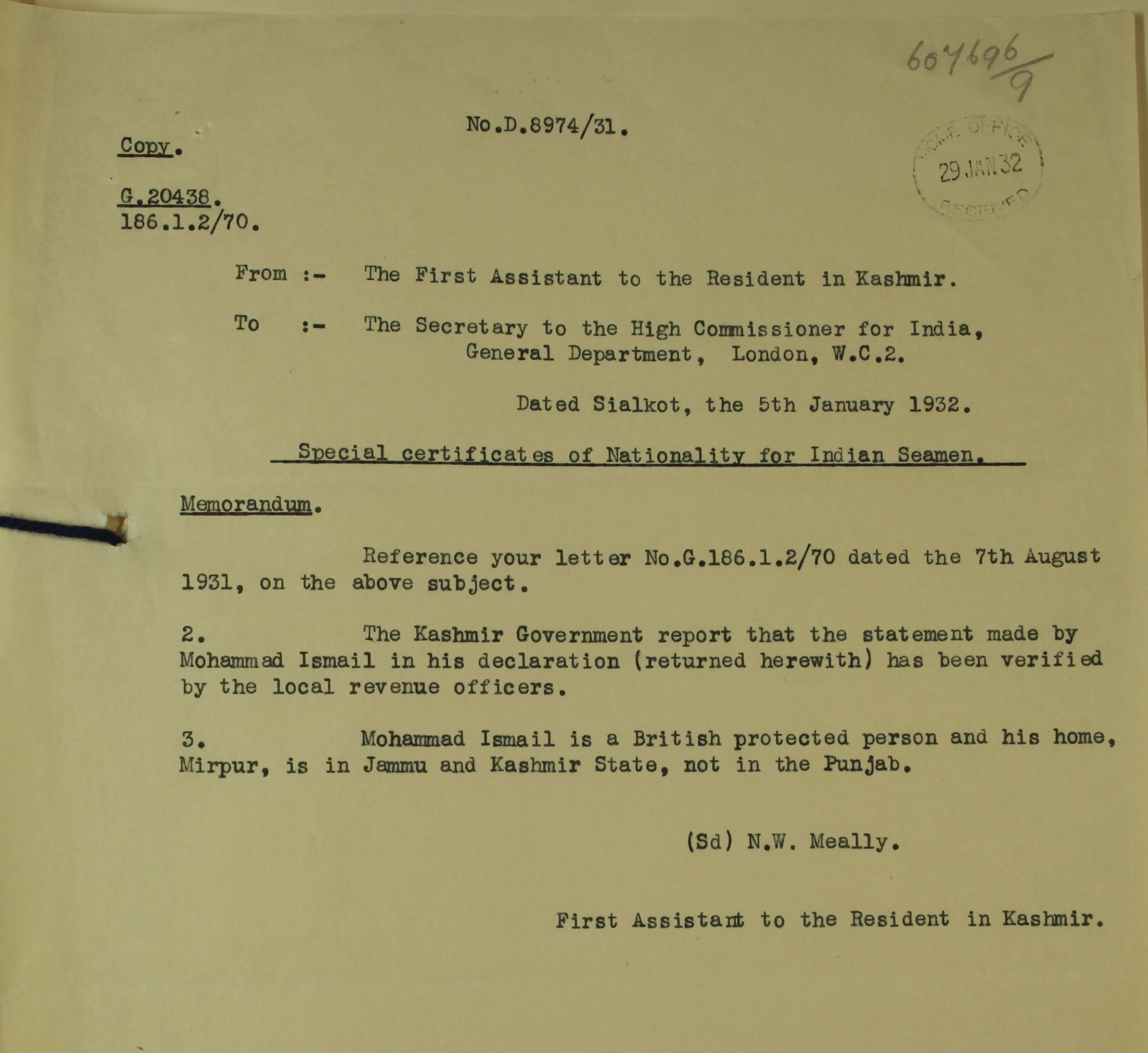 1932 Archive Document Regarding a Lascar Sailor

Many men like Ismail had served on British merchant shipping and were officially recognised as British Subjects or British Protected Persons. How far do you think that  these men can be considered British?